For a company that's focused on connecting people, the more the merrier. That's why Facebook (NASDAQ:FB) would absolutely love to get into China. It would seemingly be a match made in heaven. The largest social network ever built meets the most populous nation on Earth. Just watch the sparks fly.

The social network remains officially restricted in China by government censorship, lovingly referred to as the Great Firewall of China. Facebook is a little more polite about it though, citing "substantial legal and regulatory complexities that have prevented our entry into China to date." Social media has played roles in uprisings in other parts of the world, and this is presumably something that China is trying to avoid.

Facebook's absence in the Middle Kingdom has given opportunities to other local players that play by the government's censorship rules to jump into social media. Renren (NYSE:RENN) has earned itself the title of the "Facebook of China" and now boasts 162 million "activated users," of which 45 million could be considered monthly active users, or MAUs. SINA's (NASDAQ:SINA) Weibo micro-blogging service continues to grow in popularity, the "Twitter of China," as it were. Facebook also lists Tencent Holdings (OTC: TCEHY.PK) as a potential Chinese competitor if it ever able to gain official clearance.

Scaling the Great Firewall
Bloomberg reports that Facebook may actually have a sizable following of MAUs in China, despite the site's blockage. Researcher Global Web Index estimates that Facebook actually has 63.5 million users in China. This is based primarily on results from self-completion surveys, which the researcher corroborates with "other forms of data." 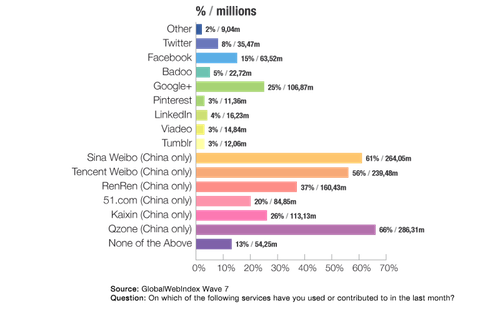 Censored, schmensored
Users could potentially bypass China's firewall by using services like virtual private networks, virtual cloud networks, or proxy servers that would reroute their data through other countries. That means that Facebook could be incorrectly categorizing some of its users' geographical location.

However, GreatFire, an organization aiming to bring transparency to online censorship in China, disputes these findings. It believes that the idea of tens of millions of Chinese Internet users going as far as to purchase a VPN service, use a proxy server, or generally possess the technical knowledge to bypass the firewall is "highly unlikely." If so, there would be much more online activism regarding other important social issues in the country that "would be hard to ignore."

This is a very valid point, because 63.5 million users would be quite a feat. For comparison, Facebook has 15 million MAUs in Japan, where the service is not prohibited. It's worth noting that Japan's total population is but a tenth of China's, but that still provides some context to the claim that Facebook has four times as many MAUs.

I don't doubt that some savvy Chinese users have gotten around the Great Firewall, but Global Web Index's digits do look a little lofty.

Facebooking the world
International MAU growth remains critically important for Facebook, as 80% of its worldwide 955 million MAUs are located outside of the U.S. and Canada. Monetization dramatically lags in those parts of the world, with Asia just barely bringing in more per user than its rest of world segment. User growth is the first step of building Facebook's business abroad.

For the time being, Facebook will simply continue to "evaluate entering China." Until then, local users will still have to either circumvent the government's censorship or settle for local alternatives.