It was a year ago today that Steve Jobs died, exactly one day after the iPhone 4S was unveiled. As one of the most heavily scrutinized companies on Earth, much ink has been spilled over whether or not Apple (NASDAQ:AAPL) will ultimately endure without him.

Few CEOs have or likely ever will deliver the type of returns to shareholders as Jobs did. He effectively reclaimed control of the company he co-founded in July 1997 after Gil Amelio was given a pink slip from Apple's board. Jobs was made interim CEO that September, and wouldn't officially become permanent CEO until 2000.

Apple was 90 days away from bankruptcy when Jobs returned, and then he did this: 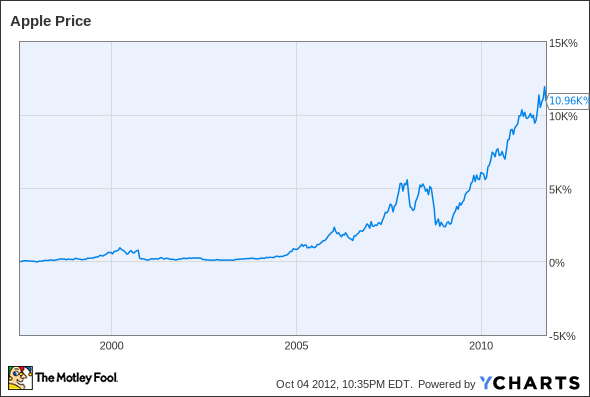 That chart ends upon his death, even though technically he resigned as CEO in August 2011, handing the title over to Tim Cook. Still, any shareholder that stuck with him through the duration of his life landed a 10,960% gain -- nearly a 110-bagger.

In the year that's passed since Jobs' death, Apple has gone on to blow out its prior iPhone sales record by a healthy margin. The fourth quarter saw 37 million iPhone units sold, the current quarterly record. 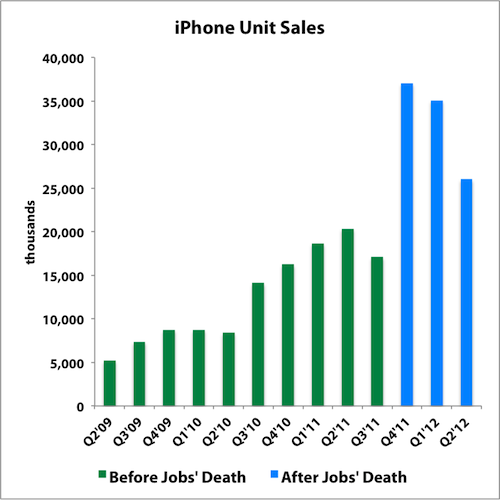 A similar story played out with the iPad family. 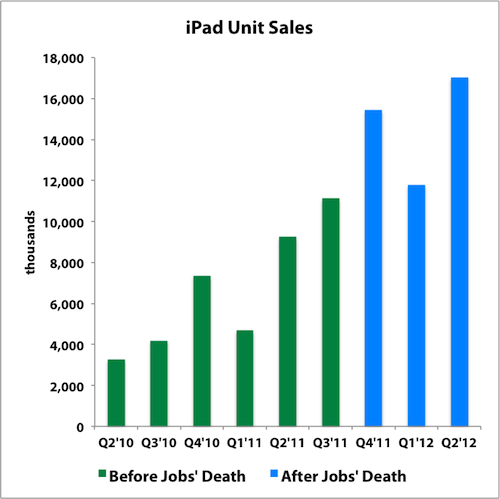 Cook has done quite the job in his time at the helm. His one-year anniversary was marked by a major legal victory against Samsung and the Google (NASDAQ:GOOGL) Android camp, a win that would have made Jobs proud.

Apple shares are now up roughly 76% since Jobs' death, so investors have their answer right there: Apple certainly can endure without him, even though the company will never be precisely the same. 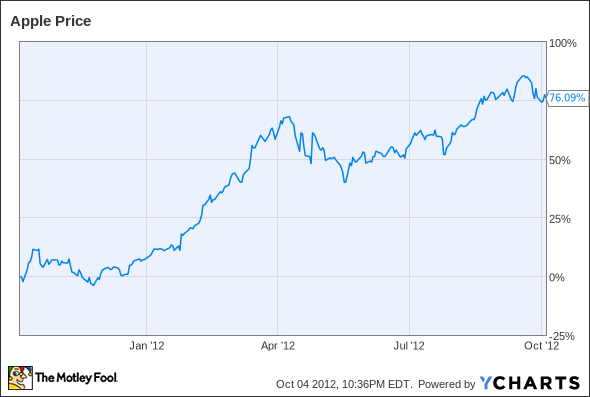 It's certainly a different Apple under Cook than under Jobs, but there's little to worry about when it comes to the company's long-term prospects.

Think different
Over the past year, Cook has firmly put his stamp on the company's culture and perception. Not only did he institute a dividend policy, something his predecessor was philosophically opposed to, but he's also changed how Apple is perceived. Instead of being a one-way media black box, Apple now responds to press inquiries about its tax reduction strategies or controversies over Chinese labor.

Cook knows his place, and defers to Apple's well-rounded management team when needed. Jobs, on the other hand, wanted control over nearly all relevant facets of Apple's business. Cook also isn't quite the futurist that Jobs was, who essentially predicted the creation of  the iPad almost thirty years ago in 1983:

Apple's strategy is really simple. What we want to do is we want to put an incredibly great computer in a book that you can carry around with you and learn how to use in 20 minutes. That's what we want to do and we want to do it this decade. And we really want to do it with a radio link in it so you don't have to hook up to anything and you're in communication with all of these larger databases and other computers.

The show must go on
Without a doubt, Jobs' passing was a loss for the world, but that doesn't mean technological advancement must halt. If anything, Jobs has inspired an entirely new generation of visionary CEOs, like Facebook's Mark Zuckerberg, who clearly looked up to Jobs as a friend and mentor.

Steve Jobs will never be forgotten, for his accomplishments will withstand the test of time.

Here's to you, Steve.