In that spirit, we three Fools have banded together to find the market's best and worst stocks, which we'll rate on The Motley Fool's CAPS system as outperformers or underperformers. We'll be accountable for every pick based on the sum of our knowledge and the balance of our decisions. Today, we'll be discussing 3D Systems (NYSE:DDD), the hottest company in one of the market's hottest niches: 3-D printing.

3D Systems by the numbers
Here's a quick snapshot of the company's most important numbers:

Alex's take
I think 3-D printing has tremendous potential. I've probably written more about this technology over the past year than any other Fool, and in many of those articles I've been strongly bullish on 3D Systems. But three things are keeping me from recommending 3D Systems today.

First is growth by acquisitions. This was recently the subject of a bear raid that displayed a rather egregious lack of understanding of GAAP accounting principles. The issue caused some whipsawing in the stock this month, and even drew 3D Systems' CEO Abe Reichental into the fray, as he felt it necessary to hold a special conference call just to rebut two articles on Seeking Alpha. Don't worry, Abe, I'm not going to get creative with your books on this one. You can still hold a press conference about me if you want, though. I could use the publicity!

Over the last three years, 3D Systems has bought 31 companies. The decade before 3D Systems' buyout binge looks like this: 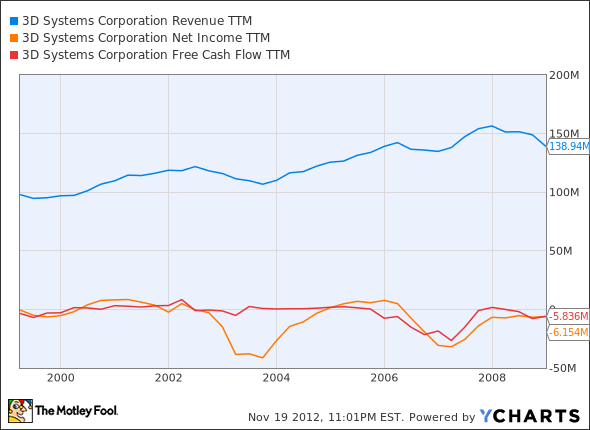 Got that? Over a decade, 3D Systems' net income and free cash flow didn't budge, except maybe to move lower. Its revenue rose 42%. Then, starting toward the end of 2009, 3D Systems started buying up as many companies as it could. Profit and free cash flow jumped, and revenue rose 145%. This performance is indisputably better than that of rival Stratasys, which has only completed one notable acquisition in the same time period, of specialty 3-D printer manufacturer Solidscape in mid-2011. Its merger with Objet, which should reestablish Stratasys as the market leader over 3D Systems, has not yet been finalized. However, despite completing a single acquisition to 3D Systems' 31, Stratasys improved its revenue since 2009 by 60%. Its free cash flow -- which was already positive at the start of that year -- has doubled.

How many more meaningful acquisitions can 3D Systems make before it effectively consolidates all of the viable smaller 3-D printing companies under its roof? Will it simply continue to acquire every start-up with a decent idea? I just have a difficult time seeing this three-year burst of acquisitions as something that can be maintained for much longer.

3D Systems' valuation is also a concern. Its stock has been pumped to the moon in 2012, rising from a P/E that was under 20 a year ago to one that's over 60 today. The company's price to free cash flow ratio is also near all-time highs at 52, more than double the P/FCF level it dropped to a year ago. When a stock's P/E rises as quickly as its price for an extended period, then you're either in for some margin compression or you probably own Amazon.com (NASDAQ:AMZN).

It doesn't take a whole lot to undermine a momentum stock. Just ask Green Mountain Coffee Roasters (NASDAQ:GMCR.DL) shareholders how they feel about David Einhorn. Or ask Netflix (NASDAQ:NFLX) shareholders how they feel about Qwikster. The market is littered with stocks that used to have P/Es as high as 3D Systems' before a single piece of bad news started a long slide.

Finally, the technological aspect of 3-D printing isn't really as well-understood by many investors as it should be. Reading a lot of hype around 3-D printers almost reminds me of the scene in Star Trek IV when Scotty uses a Macintosh -- this was in 1986, mind you -- to create a metal from the future in less than 10 seconds. A lot of movies from the 80's had a similarly fawning blind spot when it comes to computers. Scriptwriters used "computer" as shorthand for "magic deus ex machina box," creating scenes that showed no understanding of how the devices worked just to wrap up a major plot point.

I'm occasionally guilty of excessive technological optimism as well, but I try to temper my expectations by offering examples of real-world capabilities. This is often absent in articles about 3-D printing. It's fascinating technology, but it's not going to work miracles. When investors turn technology into magic, it leads to bubbles, and bubbles always pop. Always.

3D Systems might be one of the two most important 3-D printing companies on the market today, but that doesn't mean it's a great buy right now. Remember the old greedy-fearful adage. All I see are investors with dollar signs in their eyes, thinking about replicators. This may be the technology of the future, but investing is about making the best use of your money in the present, and I have to say that I do not think 3D Systems can sustain its current price.

Sean's take
I'm not sure how many times I have to say it before it finally sinks in, but we as investors are horrible predictors of when a technology will take off. Everyone expected Amazon's marketplace business and cloud business would be instant hits. They did become successful platforms eventually, but nowhere near as quickly as everyone expected. The same can be said of genome sequencing, where sequencing price points have finally dipped enough that it's conducive for researchers to use their technology.

As cool as 3-D printing is, and as low as its prices have moved, it's just not yet a commercially feasible or fully understood technology, and it's going to take some time before it is. Do I think the technology has merit, as many of my Foolish colleagues have described? Absolutely. But I doubt we're ready for the technology to take off just yet.

One concern I have is 3D Systems' reliance on acquisitions to drive growth. As Alex notes above, in the past three years 3D Systems has purchased 31 companies, which has been the primary driver of its growth. Can 3D Systems grow organically? I'd say yes, but we're probably looking at nothing more than high-single-digit organic growth, as compared to the robust double-digit growth most pundits are forecasting. This also relates to the fact that half of 3D Systems' revenue stream comes from outside the U.S. With both Asia and Europe experiencing slower growth, 3D Systems' prospects may prove too bullish.

3D Systems' valuation is also a major concern. In terms of book and sales valuation, 3D Systems is priced higher than at any time over the past decade, despite being profitable in only five of the past 10 years. This is important, as I see its technology being extremely susceptible to economic downturns. Simply put, at even 27 times forward earnings, I don't see this stock being able to hold its current valuation if GDP growth slows further.

In total, I'd lean toward being a modest long-term optimist on 3D Systems. However, at its current valuation, and with economic growth looking tepid at best, I'd actually advocate a short-term bet against 3D Systems here.

Travis' take
I'll approach this with the viewpoint of someone who has actually designed hundreds, if not thousands of parts that were rapid prototyped with a 3-D printer of some sort. Many observers may be surprised to find out that this is not new technology at all; it's just more accessible for the average designer or consumer than it was when I began making parts over a decade ago. At least some of this new-found attention is a little naïve about the novelty of 3-D printing.

One of the products that has brought a lot of attention to 3-D printing is 3D Systems' Cube printer and its Cubify marketplace. It has allowed a whole new demographic of people to see and build 3-D models, and its attractive price point makes it feasible for a whole new set of customers. But the general technology isn't new at all. I remember watching larger machines do similar work with more precision at least five years ago.

I don't say this to tamp down everyone's excitement over 3D Systems' products, but to highlight the fact that some industries have been using this technology for a long time. Yes, the materials are better, the interface has improved, and costs have come down, but it isn't new!

Is 3D Systems worth buying with this in mind? I'm skeptical of the company's valuation, as my comrades above have pointed out, and I think competition is a huge challenge. I also don't see how the market can expand quickly enough to keep organic growth high for years to come. Like I said, the main target market has been using this technology for years, and it's still too expensive to be a cool toy for consumers.

Some people also think that 3-D printing will somehow be able to replace injection-molded manufactured parts in a big way. We hear stories of 3-D printing used on movie sets or in Jay Leno's garage and the mind wanders to a world of possibility. 3-D manufacturing may eventually happen, but betting on the mass adoption of relatively slow and relatively high cost 3-D printing is risky at best. It serves an incredibly useful purpose if you're designing parts that will eventually be molded or want a one-off run of something, but there are more effective ways to manufacture small batches of parts. Proto Labs can make an actual molded part, with higher quality materials than are used in 3-D printing, and have it to you the next day.

You may have also heard about mini-manufacturing facilities that have popped up using 3-D printing to turn around parts quickly for anyone who wants them. "But Travis, when these businesses expand around the world, the 3-D revolution will take hold!" I have news for you. The custom mini-manufacturer isn't a new business model either. If you live in an urban area I bet you can find one a short drive away and get a 3-D modeled part made by morning. 3-D printing is new to many but it's a pretty well-established industry, with well-known advantages and plenty of flaws.

When weighing the risk and reward for 3-D Systems, I just can't get behind an outperform call at the current price. Maybe we'll miss out on a huge winner if adoption rates pick up and speed and materials improve, but I'd rather do that than buy a company that's priced for growth and doesn't grow. We know that's a recipe for disaster in investing.

The final call
With two calls for an underperform and Travis choosing to avoid the stock entirely, it looks like we three Fools will go on the record placing a short-term underperform call on this stock, which we will probably reevaluate at the end of the year. You can find a history of our calls on our TMFYoungGuns CAPS page, where we're currently beating index by almost 100 points.