Back at the end of 2011, I set out to pick a dividend stock that I thought was poised for a breakout year in 2012. Today, I'm going to tell you how my current pick -- waste- and water-management provider Veolia Environnement (OTC:VEOEY)-- has performed, as well as offer you access to a special free report on three Dow dividends every investor should consider for their portfolio.

Before going any further, let's cut to the chase and show how Veolia has performed this year, relative to the S&P 500, after dividends are taken into account. 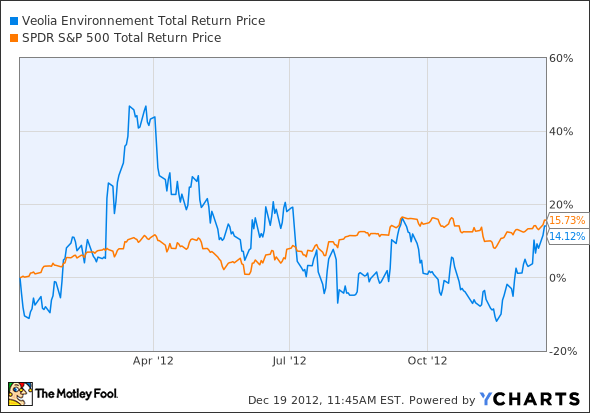 Overall, there were three main themes that played a role in the company's up-and-down performance this year.

Because Veolia is headquartered in France, and does a large bulk of its business on the European continent, the company's stock has had to ride the up-and-down waves of the European sovereign debt crisis . Usually, this means that the stock goes up when it seems like the Eurozone countries will bind together to solve their problems, and go down when members seem to be splintering.

By and large, these problems are out of the company's control. One advantage it does have, however, is that waste collection, water delivery, and environmental services (usually the purifying of water) are considered basic necessities, and the least likely to be cut by local and national governments in a bind.

Leadership issues
When former CEO Henri Proglio turned the reins of Veolia over to his successor, Antoine Frerot, Proglio thought he had picked someone who would maintain the company's growth plans. Instead, Frerot had a look at the balance sheet and the crushing debt, and decided it was time to scale back.

Back in February, there were rumors  that Proglio -- who still sits on the company's board -- was planning a coup to replace Frerot with someone whose sensibilities were more akin to his. Luckily, that attempt failed , and left Frerot in charge.

Turnaround-in-progress
One of the reasons I'm so high on Frerot's plans is because they have something Veolia desperately needs: a healthy serving of common sense.

Another part of the turnaround process is an increased focus on water management systems. The company has made important steps in this area as well. This includes an announcement in November that the company would be supplying drinking water to over 1 million people in New Delhi, India , as well as a 25-year contract with the city of Leeds, England, to provide municipal waste treatment.

2013 and beyond
Though the above moves are certainly encouraging, Frerot still has a lot of work to do to get his company back in a healthy financial position. Personally, I'm encouraged by these moves, and because Veolia is only a small part of my overall portfolio, I have no problem holding my shares, collecting my dividends, and maintaining the bullish CAPScall on my All-Star CAPS profile.

If you'd like to look at a relatively safer dividend pick, I suggest you look to Waste Management.