Here at the Fool, we tend to like founder-CEOs around these parts, especially those that have proven themselves to be visionaries over the years. One such company and CEO is none other than Amazon.com (NASDAQ:AMZN) and Jeff Bezos.

Bezos recently sat down for a brief interview with the Harvard Business Review for its IdeaCast podcast to discuss a wide range of topics. What did Bezos have to say?

On the long term

Virtually all companies say they focus on the long term, but surprisingly few actually do it in practice. In part, that's our fault as investors, demanding ever-increasing amounts of black ink. In that sense, it's sometimes good to ignore some of the noise from the Street and really focus on the business.

Amazon's always prided itself as being "Earth's Most Customer-Centric Company," and in some cases, putting the customer's interests first conflicts with shareholder interests. For example, lower prices (good for customers) typically translates into lower profits (bad for shareholders). But Bezos believes it all tends to work out in the long run: "If you're long-term oriented, customer interests and shareholder interests are aligned. In the short term that's not always correct."

Bezos also notes that a long-term focus is required for innovation: "Also, we like to invent and do new things and I know for sure that long-term orientation is essential for invention because you're going to have a lot of failures along the way."

Other companies sometimes set project time frames of two to three years, while Amazon goes all the way up to seven. Here's Bezos again:

On the share price
On Monday, Amazon shares briefly tapped fresh all-time highs of $269.73 and are still flirting with those prices. The e-tailer got an analyst upgrade from Morgan Stanley (NYSE:MS) analyst Scott Devitt, who assigned an overweight rating and price target of $325 to Amazon shares. Devitt said Amazon's vast fulfillment network is a major advantage that will drive growth for upwards of 10 years.

Bezos may have caught the headlines, but beyond that doesn't follow the daily moves. Instead, he says, "I care very much about our share owners." As such, he focuses more on the long-term share price.

On a Kindle Phone
When coming out with new offerings, Amazon likes to build new innovative concepts with a unique twist instead of following rivals with copycat products. He was responding to the idea of Amazon building a physical retail store, but then when asked if developing a phone falls into the same category, Bezos didn't even hesitate:

Yeah, absolutely. I mean, that's the kind of thing where you would ask, "What is the idea? How would it be differentiated? Why wouldn't it be 'me too?'"

There you have it, folks. Amazon is likely working on a Kindle Phone as we speak. Chances are it would run a heavily modified, or forked, version of Google (NASDAQ:GOOGL) Android like the Kindle Fire to piggyback on Amazon's existing Android app repository. Remember that Jon Rubinstein still sits on Amazon's board, and his resume includes years at Apple (NASDAQ:AAPL), Palm, and Hewlett-Packard (NYSE:HPQ).

Much like how Amazon has hijacked Android and wedged itself into the tablet market, investors can expect it to attempt the same in the smartphone market. Most important, why wouldn't a Kindle Phone be "me, too?"

On free cash flow
Amazon trades at astronomical earnings multiples due to its low net margin. However, Bezos says that focusing on margins is the wrong metric to watch:

Amazon's free cash flow is highly cyclical, along with its business. However, you can see that as net margins have declined over the years, overall free cash flow has increased. 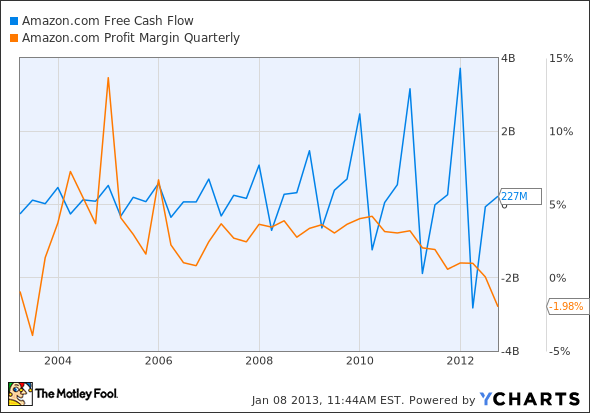 In that sense, Bezos is doing precisely what he feels is best for investors.

On leadership
Bezos says in the early days he quickly learned one valuable lesson: "Inventing and pioneering requires a willingness to be misunderstood for long periods of time."

Even today, Amazon remains widely misunderstood, as investors focusing on traditional valuation metrics doubt its prospects. Famed value investor David Einhorn has said, "Amazon's future is a riddle." Yet Amazon (and Bezos, given his 19% stake) has never been worth more than its current $122 billion market cap.