Still dissatisfied with paltry interest rates, income investors are reaching for yield and looking to dividend stocks. Even with the dividend tax rate set to increase for high earners, dividend stocks remain alluring. But some dividend stocks hold more promise for growth in 2013 than others.

Creme de la creme
For this list, I zeroed in on companies considered Dividend Aristocrats. To be considered one, a company must have paid a dividend annually and consistently raised it every single year for two decades. I took a closer look at companies that have ratcheted up their dividends for much longer than that. The five companies I focused on have existed for more than 50 years, with four of the five founded over a century ago.

Take a look at how reliably this handful of Dividend Aristocrats have both paid and increased their dividends.

These five dividend aristocrats have not just managed to increase their dividends, but have done so at a strong pace well above the rate of inflation. Glance at how they've stacked up against inflation during the past 10 years. 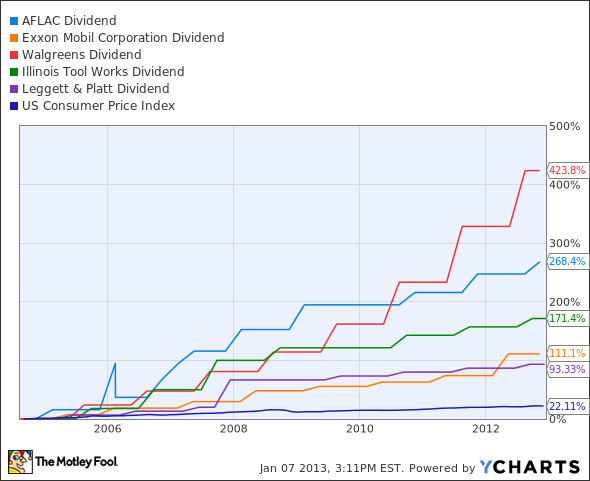 During the past decade, each of these five companies has raised its dividend at a rate that far outpaces inflation. For instance, Walgreen has grown its dividend nearly 424% during this same period. Meanwhile, Aflac and Illinois Tool Works increased their dividends by roughly 269% and 171%, respectively. ExxonMobil and Leggett & Platt ratcheted up their respective dividends 111% and 93%. During this time, the CPI grew 22%.

Best buys
While the overall market is trading at a price-to-earnings ratio near 17, ExxonMobil's and Aflac's P/E ratios are both close to 9. Illinois Tool Works holds a P/E near 13, signaling it may also be undervalued. Meanwhile, Walgreen and Leggett & Platt both possess P/E ratios close to or above the market, at 17 and 22, respectively.

Let's take a closer look at the three companies that appear undervalued. A stock with an attractively low P/E often means something sketchy is going on with the company, which can send faint-of-heart investors running for the hills. But investors with a strong stomach see these signals as potential buying opportunities.

For ExxonMobil, the problem's been increasing costs. The company recently announced a multibillion-dollar natural gas project would instead cost $3 billion more than the original price tag. But in a world of increasing energy demand, ExxonMobil remains the globe's largest energy company. And its $13 billion cash reserves will come in handy for any future dividend hikes.

As for Aflac, poor investment choices are to blame. The insurance giant had a huge chunk of its investment portfolio tied up in Greek, Irish, and Portuguese banks. Not surprisingly, Aflac's been taking big writedowns in the wake of the financial crisis. A new chief investment officer, formerly of Goldman Sachs, joined Aflac in 2011 and has been tasked with figuring out how to minimize the company's risk exposure. So far, it's given shares a boost. During the past six months, the stock has gained 22% while the S&P 500 is up roughly 8%. Aflac may also benefit from the Obamacare mandate requiring everyone in the U.S. have health insurance.

Illinois Tool Works boasts huge business in the construction and transportation industries, two arenas hard hit during the past several years. CEO David Speer died in November, forcing Illinois Tool Works to put its succession plan in place. The diversified manufacturer should benefit  from a gradual economy recovery. It's already seen progress: Its stock price was up nearly 27% in 2012.