Chance are that you've heard of Hurricane Sandy, as the worst of the storm seemingly covered half of the country, causing wind advisories from Michigan to Florida. It's estimated that the hurricane cost $62 billion in damage.

There was another catastrophic weather event last year that could cost just the same in damage, but it wasn't as photogenic as flooded subway tunnels or a broken crane hanging hundreds of stories high: the drought. The drought of 2012 cut U.S. GDP by an estimated 0.5% to 1%, and estimates for the damage it caused range from $35 billion to $77 billion.

While not as eye-catching news as a hurricane, the drought caused just as much damage monetarily. And the unfortunate part is that drought conditions haven't improved. The ground doesn't start fresh just because the calendar changed, which means this year could see more withered crops, more record agriculture prices, another drag on the economy, and plenty of other far-reaching effects.

The drought's damage
How can some stunted corn and wilted soybeans total as much damage as a hurricane? Agriculture is big business. About 80% of farmland has crop insurance, and the federal government pays on average 60% of the premiums for farmers, along with sharing the cost of losses with insurers such as Everest Reinsurance (NYSE:RE) and ACE Limited (NYSE:CB). In 2011, there was nearly $11 billion in crop insurance losses.

But farmers are just the first in the supply chain. Grain elevator operators, such as Archer Daniels Midland (NYSE:ADM), see less business as well, with its agricultural service segment's profit falling over 75% compared to the summer quarter of 2011. Costs then spread through the economy, from the trucks and trains that have less grain to haul to the retailers who shave a few percentage points of profit off of their margin to the consumers who must pay a little more for their food. The USDA estimates food prices will rise 3% to 4% in 2013, compared to a typical increase between 2.5% to 3%.

Outside of the U.S., world food prices spiked 10% during the summer as the U.S. drought combined with a drought in Russia, which tightened supplies. High global food prices in 2008 caused riots from Haiti to Yemen, and investment manger Jeremy Grantham notes that Egyptians were spending 40% of their income on food before the 2011 revolution. World food prices have since declined with the help of South American crops, but what will 2013 hold? 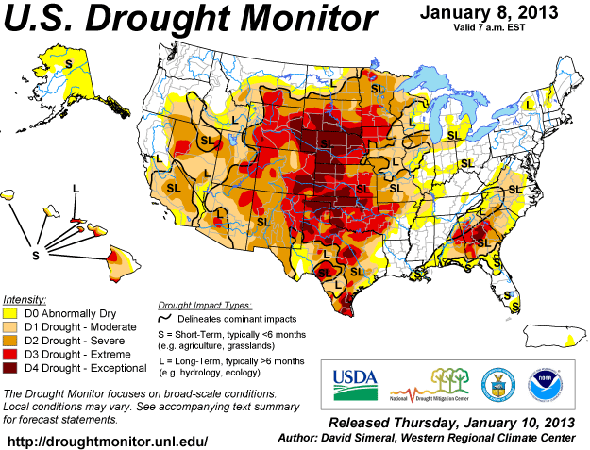 The U.S. Drought Monitor is produced in partnership with the National Drought Mitigation Center at the University of Nebraska-Lincoln, the United States Department of Agriculture, and the National Oceanic and Atmospheric Administration. Map courtesy of NDMC-UNL.

And looking at the drought outlook, there isn't much optimism in the forecast: 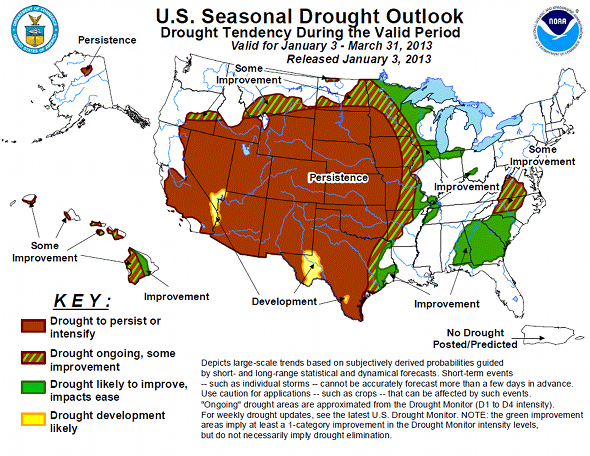 As stated in the Climate Prediction Center's forecast, a "general persistence of extreme to exceptional drought is expected across the Plains states during the dry season." If the drought persists, and rain doesn't come, what does that mean for 2013?

Look for continued hard times for those in the agricultural supply chain and those insuring crops. Look for more global unrest in the developing world if food costs rise and take up larger amounts of income, beyond what many might be able to afford. Look for a continued drag on U.S. GDP as consumers pay a few more dollars for food and have less to spend on discretionary goods.

Also, such companies as Syngenta (NYSE: SYT) that can help bump crop yields in the face of tough soil could see a boost in business. The company's stock had a spectacular 2012, up 37%. Additionally, if Argentinian agriculture producer Adecoagro (NYSE:AGRO) can make up for U.S. crops and sell at higher commodity prices, it could see a much improved 2013. However, the company has been hampered by droughts in the past and isn't immune to weather changes.

There's no such thing as bad weather, only bad clothing
Ben Franklin said, "Some are weather-wise, some are otherwise." While another drought isn't guaranteed, realize how it might affect you, your world, and your portfolio. If it gets hot out there, make sure your portfolio is dressed for the weather.