In response to a question about where Apple's (NASDAQ:AAPL) stock might head, analyst Horace Dediu remarked, "The stock price can be determined through a simple function: Take earnings and multiply it by a random number."

While that "random number" remains mysterious and hotly debated, at least a corporation's earnings can be defined through solid numbers. The worry now, however, is that earnings are at an all-time high and will begin to revert to the mean. And if earnings fall and that random number remains the same, then the stock price falls.

How long can earnings survive at their lofty levels? 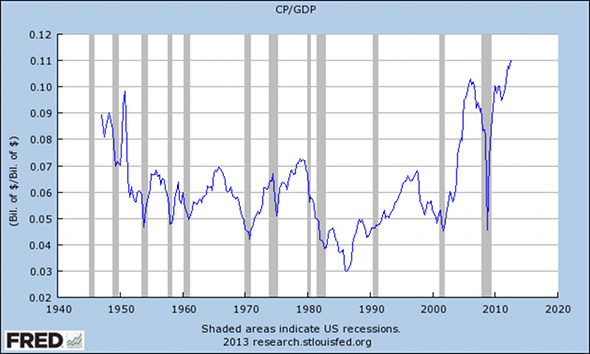 Some argue that the past average of profit margins doesn't matter because technological advancements have improved profitability and efficiency. For example, business software maker Oracle (NYSE:ORCL) touts its Hyperion Planning services, which helped medical-product maker ResMed: "The project successfully encouraged better regional sales techniques, by focusing on high-margin products and by providing profitability information on a product-by-product basis with continuous monitoring of performance." The ability of computers to stomp on the profit pedals just might have broken our ties to the historical mean.

On the other hand, many think the opposite. James Montier of GMO argued that government spending boosted corporate profits by 7.6%, and as the government spends less due to tighter budgets, profit margins will fall back to the historical average. He also noted that while government expenditures may remain high during the election year of 2012, they will likely fall in the following years. If his theory is true, the resulting fiscal cliff and debt ceiling compromises will be the end of elevated corporate profits.

John Hussman of the Hussman Funds had a more sarcastic take on historic profit margins. He concluded, "The upshot is that if investors are willing to believe (without the use of off-label hallucinogens) that current profit margins are the new normal, and will be sustained indefinitely, then Wall Street's valuations based on current and forward earnings estimates can be taken at face value."

In the future
Analysts definitely believe in the sustainability of profit margins. According to Yardeni Research (link opens PDF), profit margins for the S&P 500 (SNPINDEX:^GSPC) sat at 9.9% at the beginning of 2013, with analysts expecting 10.6% in 2014. Analysts see a rise from already higher-than-normal corporate profit margins. And they might be right.

But it's also a good time to remind oneself that analysts always reach for the stars with their expectations. As one McKinsey study finds, "On average, analysts' forecasts have been almost 100 percent too high."

A company like Apple, with a profit margin of more than 20%, has been rumored to be making a low-cost version of the iPhone. And to attract buyers in the cheaper segment, Apple might sacrifice some of that margin, even if it profits from a lesser iPhone. Analysts have also reduced expectations for General Electric's (NYSE:GE) earnings from $0.47 per share -- the consensus just a few months ago -- to $0.43 per share today. GE CEO Jeff Immelt has a goal of raising profit margins by 0.5% to 0.7% this year through a new focus on services based around its heavy equipment.

But timing is tough
Even if you believe that profit margins will return to a lower state, guessing when that will happen is the difficult part. One Goldman Sachs analyst presented what he thought was the end of high profit margins last January. Montier and Hussman wrote their claims in March. It might be true that the newly secure government will cut spending and hurt profit margins, but corporations are also great at lobbying for their interests.

Market timing of any sort is near-impossible. You can only do your best by focusing on stellar companies that you think have more value than the market realizes. That may be a high-margin player like Apple, a commodity business with profit margins in the low single digits, or even an upstart that has yet to make money.