On the back of three consecutive weeks of stock market gains, this shortened week has started with a whimper, with the Dow Jones Industrial Average (DJINDICES:^DJI) at breakeven and the broader S&P 500 Index (SNPINDEX:^GSPC) up 0.25% as of 10 a.m. EST.

Volatility: What the market saw
On Friday, the VIX (VOLATILITYINDICES:^VIX) index registered its lowest value since April 2007. The VIX, which is derived from option prices on the S&P 500, is a measure of investors' expectations for stock market volatility over the next 30 days.

Regular readers of this column will know that I find the current ultra-low-volatility regime perplexing (see my comments here and here). However, it looks like we have a partial solution to this puzzle, as Republicans now say they aim to have the House of Representatives vote on a bill to suspend the federal debt ceiling until May 19, which would enable the government to pay its debts. Technically speaking, we've already hit the debt ceiling; the government is now operating by shuffling funds between different accounts. This workaround is thought to be able to stave off a default until mid-February or early March.

The possibility -- remote, but existent -- of a default is clearly the biggest near-term threat to asset prices and could easily trigger a spike in the VIX. In that regard, the debt ceiling is much more serious than the fiscal cliff, because the risk is associated with a single event that has an immediate, quasi-irreversible impact. As the following graph shows, in the nearly three years since the apex of the credit crisis (the fourth quarter of 2008 and the first quarter of 2009), the highest value achieved by the VIX was during the debt ceiling debacle in August 2011, when it hit 48: 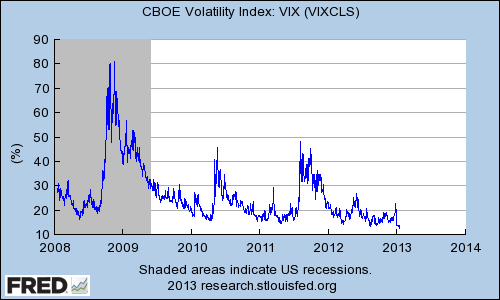 Recall that the VIX reflects investors' outlook for 30-day volatility in the S&P 500. As of Friday, those 30 days would have taken us into the period during which the Treasury estimates it would no longer be able to meet its obligations without an extension of the debt ceiling. It now appears that the market had anticipated that Republicans would get in front of this issue instead of playing a game of "debt ceiling chicken," as some were explicitly threatening. Does this fully justify the current level of the VIX? I'm not convinced of it. However, with regard to the debt ceiling, the market made a keen assessment of the near-term risk -- better than mine, in any event.