Sadly, Adam West's classic Batman series from the 1960s probably won't ever be available as a Netflix (NASDAQ:NFLX) stream. The video service has to settle for making these classic sound effects by beating up analyst expectations. (Calm down, Bat-fans. I know that West's 1966 Batman movie is available at Netflix today and does feature classic sound effect bubbles.)

In the fourth quarter of 2012, the average Wall Street analyst expected Netflix to show a $0.13 net loss per share on about $934 million in revenue. Instead, the company reporteda $0.13 profit per share and sales of $945 million.

The report punched holes in common criticisms like Batman punches out bank robbers. These misconceptions have long put a lid on Netflix share prices, because they were collectively seen as sure signs of the company's imminent demise. Proving them wrong sent share prices up as much as 41.6% in extremely heavy after-hours trading -- the kind of pop you'd expect from a generous buyout, not just a regular earnings report. Netflix hasn't seen these price levels since the Qwikster intermezzo in 2011.

In fact, Hastings seems to model his strategy after today's cable landscape -- just with an online twist.

You don't expect to find the same movies on HBO and Showtime, right? In particular, both channels produce a ton of high-quality content of their own that will never show up on rival services. So consumers happily buy both, or all four, and enjoy several sources of premium content. 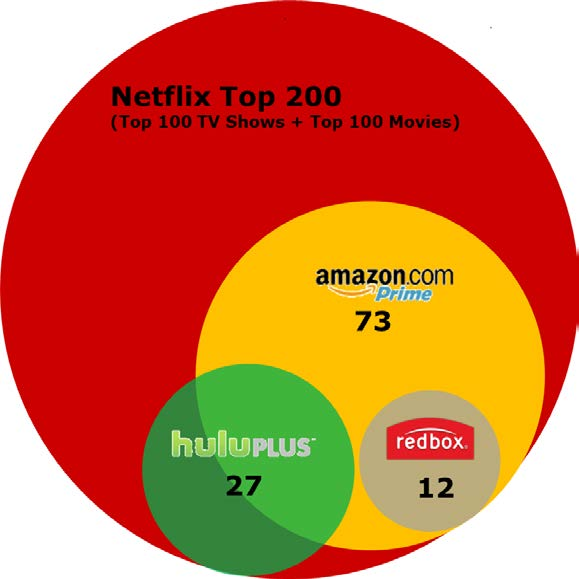 Redbox is still a beta service, but even mighty Amazon owns only one-third of the most popular Netflix content. Not a whole lot of overlap there.

I'm sure you could produce a similar graphic that shows Netflix as a shrinking violet circle with a minority of the most common Hulu shows, or Amazon Prime movies. That's exactly the point. Netflix doesn't own a complete Hollywood catalog, and never will. The licensing landscape is far too fragmented for that. Just ask Adam West, whose Batman series never even reached home video due to a complex web of conflicting rights and licenses.

But everyone can get their hands on enough exclusive content to stay relevant, and profitable, and growing until this new market matures. So bring on the competition, and give consumers even more reason to get comfortable with digital media. Everybody wins.