Netflix (NASDAQ:NFLX) just gave investors a few reasons to look at its business differently. Instead of a wounded company risking saturation in its biggest market, it looks to be thriving in an industry that has plenty of growth left. Netflix broadly beat expectations on revenue, subscribers, and profits.

The company also surprised bears by closing 2012 in the black, even after shelling out for expensive launches into more international markets. And the results pointed to the fact that Netflix will soon hit an even more important turning point in its profitability: Streaming is set to overtake DVDs as the company's main profit driver.

The decline of DVDs
While DVD subscriptions had been the company's bread and butter, Netflix made the now infamous decision 18 months back to go ahead and disrupt itself. The company chose to latch its business results onto a small but growing streaming service. Netflix split out its DVD segment, which had members paying upward of $20 a month to get movies in the mail. The focus turned to gaining purely streaming members, who would pay just $7.99 a month for unlimited viewing.

CEO Reed Hastings has been telling investors for more than a year that the economics of the business are actually much better that way. He argued that, despite the fact that a typical DVD subscriber kicks in way more profits than a streaming member does -- $16 vs. $4 in the most recent quarter -- it's marginal subscribers that really matter. In other words, it is profits from that new subscriber that make the difference for a growing business. And for that subset, streaming growth is much more important to the bottom line than the DVD business could be.

That argument was hard to buy a year ago. Netflix had just shed $50 million in contribution profit from its DVD segment, as members fled the service after the fumbled pricing changes. And in return, Netflix only added $15 million in profit growth on the streaming side. Instead of an earnings expansion, that sure looked like a net loss of $35 million. And competitors were happy to step in and grab Netflix's lost DVD subscribers. Coinstar's (NASDAQ:OUTR) Redbox service, for one, grew to 35,000 DVD-dispensing kiosks last year.

The rise of streaming
But things look different a year later. Contribution margin from the streaming service jumped to 18.5% last quarter. That's nearly double the 10.9% the company booked in the year-ago quarter. And Netflix expects that figure to keep rising as it spreads its fixed content costs over a growing streaming subscriber base. Netflix has forecast a 1-percentage-point expansion in streaming service profit margin per quarter, but it regularly beats that guidance.

Meanwhile, as the DVD side of the business continues to shrink, and the streaming side ramps up, there's been a convergence of profits. 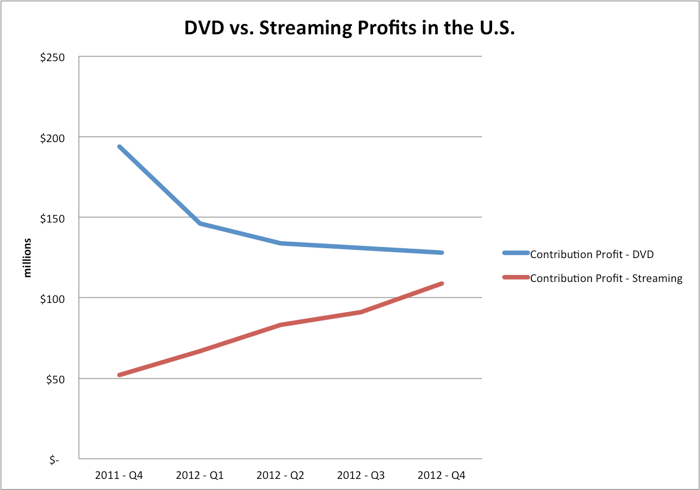 Profits from the streaming business are set to pass the DVD business soon, if not next quarter.

Two other points jump out from this chart. First, you can see evidence of the disastrous PR fiasco hitting Netflix's books hard between the fourth quarter of 2011 and the first quarter of last year. Profit contribution from the DVD business plunged by 25% over that time, knocking the segment's margin down from 52.4% to just 45.6%.

But also notice how the DVD line is flattening out over time. That's because the defection rate of subscribers has been slowing over each of the last five quarters. Netflix lost 2.8 million DVD members in the year-ago quarter. This year, losses were just 380,000. Yet at the same time, profits from the streaming business have been steadily growing, as the company added more than 5 million subscribers in 2012.

Looking ahead
That expansion should help drive Netflix's first $1 billion-revenue quarter sometime in 2013. Sure, rivals aren't ignoring that market potential. Coinstar just recently teamed up with Verizon (NYSE:VZ) to launch a hybrid DVD/online streaming subscription service called Redbox Instant. It has just a small subset of Netflix's content, but it is yet another competitor that the company will need to watch.

The bottom line is that the streaming service is set to overtake DVD as the company's main engine of profitability. This is a point that Netflix could have reached with a lot less drama, if it hadn't been so aggressive at jettisoning those red envelopes. Still, it points to improving profitability ahead as long as growth continues in the streaming service while losses moderate on the DVD side.