On Thursday, the high-yielding mortgage REIT Annaly Capital Management (NYSE:NLY) announced that it has "reached a definitive agreement with CreXus Investment Corp. (NYSE: CXS) to acquire for $13.00 per share in cash ... all the shares of CreXus that Annaly does not currently own."

While Annaly's announcement went on to endorse the multiple purported benefits of the deal, shareholders in the mortgage REIT would be wise to consider what lurks beneath the surface.

The deal looks good -- at first
On the surface, as I've discussed before, this looks like an extremely good deal for Annaly given the multiple operational synergies it appears to offer. Until now, CreXus operated within the Annaly family of companies, paying management fees to a wholly owned subsidiary of Annaly, FIDAC. With the acquisition, these will now be consumed under one roof.

Also, unlike Annaly, CreXus is entirely unleveraged. In fact, its third-quarter balance sheet contains absolutely no debt whatsoever. Annaly, on the other hand, has more than $100 billion in repurchase agreements alone (these are short-term debt instruments secured by collateral) compared to a mere $17 billion in shareholders' equity.

The net effect, in turn, will be to lower Annaly's average cost of funds, increase its yield on earning assets, and therefore increase its pivotal interest rate spread. With respect to its cost of funds, Annaly paid an average of 1.5% to borrow money in the third quarter of last year. This was markedly higher than many of its competitors, including American Capital Agency (NASDAQ:AGNC), which reported a 1.1% cost of funds, and ARMOUR Residential (NYSE:ARR), which had a 0.9% cost of funds over the same time period.

Alternatively, with respect to its earning-asset yield, Annaly is also earning less on its portfolio of mortgage-backed securities than both of these companies. In the most recently announced quarter, as I just noted, Annaly's came in at 2.5%, American Capital Agency's at 2.6%, and ARMOUR Residential's at 2.7%. It follows, then, that the same relative disadvantage is holding true in terms of interest rate spreads, where the three companies line up at 1.02%, 1.42%, and 1.8%, respectively.

In other words, despite the fact that I neither like nor trust Annaly's management, there's legitimate reason to believe that the CreXus deal will indeed be "immediately accretive to both [...] taxable earnings and [...] dividends per share," as Annaly asserts in a press release it published this morning.

But is this really the direction Annaly should go in?
For investors in Annaly who think all of this sounds great, however, I encourage you to remember the adage: "What looks too good to be true, often is."

Make no mistake about it, Annaly has provided long-term investors with a fantastic rate of return over the past 15-plus years. As you can see in the chart below, since going public, Annaly's shares have provided a total return of 606% compared to the broader market's 103%. 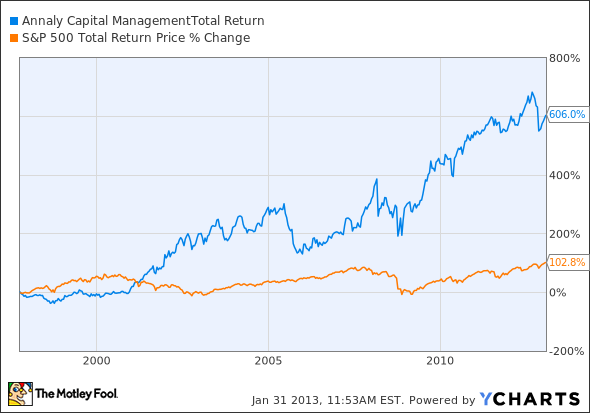 How is this possible? Aren't Annaly's returns inextricably linked to the housing sector? And didn't that monumentally implode five years ago?

While the answer to the latter two questions is "yes," the reason Annaly nevertheless flourished has to do with the nature of its portfolio. That is, until now, Annaly has essentially only invested in mortgage-backed securities that are insured by Fannie Mae or Freddie Mac, so-called "agency" MBSes. Thus, despite the fact that a large swath of the mortgage holders have defaulted on their interest and principle payments since 2007, Annaly's revenue stream was never in jeopardy.

If anything, in fact, the financial crisis was a godsend to the pioneering mortgage REIT because it led the Federal Reserve to lower short-term interest rates to historically unprecedented levels, which, in turn, drove down Annaly's borrowing costs.

But now, in an abrupt about-face, and for the first time in its history, Annaly is changing tactics. Its leadership has essentially decided to bite the hand that feeds it, as CreXus' portfolio isn't similarly insured by what is effectively the full faith and credit of the United States.

To be fair, the size of CreXus' portfolio relative to Annaly's makes this acquisition less of a concern in and of itself. What it does do, however, is show that Annaly has decided to abandon its tried-and-true model that has benefited shareholders for so long while at the same time insulating them from credit risk.

According to its original announcement in November of last year, the company intimated that it "may allocate up to 25% of our shareholders' equity to real estate assets other than Agency mortgage-backed securities."

So what else could be on the horizon? The fear is that another non-agency REIT by the name of Chimera Investment Corporation (NYSE:CIM) may very well be next. And, as I've discussed on numerous occasions (most pertinently, here and here), that could very well turn out to be pure disaster for Annaly's shareholders.