If you looked only at the earnings results for Valero (NYSE:VLO), then you got only half of the story. This week's impressive share pop certainly made investors smile, but what's even more promising is some of the news to come out of the earnings conference call. Let's go through three key points that didn't show up on the earnings release but are just as important for the long-term health of the refining industry.

So light, so sweet, so domestic
Valero has facilities across the U.S. that deal with several different types of oil. Of the 2.6 million barrels per day the company is able to refine, about 900,000 barrels per day of that is light sweet crude. What was surprising about this quarter, though, was that 100% of light sweet crude was supplied domestically.

From a pricing standpoint, this should not come as too much of a surprise. Spot prices for West Texas Intermediate have been trading at a discount to Brent for well over a year. 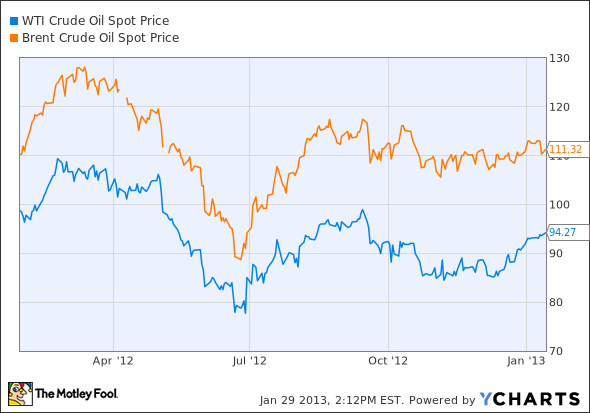 Domestic supply gluts, the largest reason for these discounted prices, have given refiners a very strong position when buying crude, which is why these companies have been able to post almost astronomical refining margins. This past quarter, Valero posted a $14.90 operating income per barrel for their mid-continent refineries, where much of this light crude is processed. They're not the only ones, either. Phillips 66 (NYSE:PSX) just reported a $24.80 refining margin for their central corridor facilities as well.

With the pace of production increasing at such fast rates, it's going to be hard for midstream companies to keep up with infrastructure. As long as this market dynamic holds true, expect refiners like Valero and Tesoro (NYSE:ANDV) -- which rely on light sweet crudes for 35% and 65% of their refining capacity, respectively -- to reap large rewards.

Keystone is the key
It shouldn't come as a surprise that not all crude oils are created equal, and refineries across the U.S. were built to handle certain types of crude based on where they were located. In the case of the Gulf Coast, much of the refining capacity there was built to handle the heavy sour crudes we were importing from places like Venezuela and Mexico. Now, though, there is a new oil source that wants the attention of Gulf Coast refiners: Canadian oil sands. Not only does this oil source look attractive from a geopolitical standpoint, but it may be the best for refiners as well. From Valero President and COO Joe Gorder: "[W]e want heavy sour crude in the Gulf Coast. Keystone pipeline is the most economical way for us to do that."

Let's be clear here: This isn't just the most economical way to move Canadian oil sands to the Gulf; it is the most economical way to move heavy sour crude to the Gulf. Once completed, TransCanada's (NYSE:TRP) Keystone pipeline will supply 1.1 million barrels per day of heavy sour crude to the Gulf. According to the Energy Information Administration, Venezuelan crude imports to the U.S. are right around the 1 million barrel-per-day range as well, which represents 40% of all Venezuelan exports. So when the pipeline does go online, it will put a lot of pressure on imports to try to compete on price. This is just another possible way U.S. refiners could be in a strong buyer position for quite some time.

Going beyond our borders
Perhaps one of the most discouraging stories from the refiner's standpoint is the slowing of North American consumption. For the quarter, fuel demand at Valero facilities dropped 6.8%. Basic supply and demand would suggest that the price at the pump would drop with increased supplies and reduced demand, but this hasn't been the case in the United States. Domestic retail prices have been able to remain modestly high because companies such as Valero have been able to export to premium markets abroad. According to Valero Chairman and CEO Bill Klesse, the company has plans to export 400,000 barrels per day of refined products to what he describes as premium markets. That would represent almost 15% of Valero's total yield for finished products.

In terms of sustainability, this is the best competitive advantage U.S. refiners will have in the upcoming years. By providing strong export outlets for refined products, these companies will be able to maintain higher prices in the domestic markets while feedstock prices remain low. If fuel prices in the U.S. start to decline, expect a ramp-up in exports to soon follow.

What a Fool believes
While this quarter took many analysts by surprise, it shouldn't come as a big surprise that this performance could continue for a few more quarters. The combination of high domestic supply, low infrastructure capacity, and increasing export demand for finished products are a recipe for big profits. Expect similar results from Valero and its competitors until one of those elements changes.

If crude prices do start to head north, though, refiners will begin to feel a little margin heat. That doesn't mean all companies will suffer the same fate. In our free report, you can check out three companies that will crush the market when crude oil passes $100 a barrel. For your own copy of this report, click here.