In the fourth quarter of 2012, Apple (NASDAQ:AAPL) became the largest smartphone vendor in the U.S., with 34% market share. That's more than just a little impressive, but it's only a piece of the mobile pie. The developing world is adapting to smartphones quickly, but Apple's current iPhone lineup doesn't make the cut for people in developing countries. The demand is there for cheaper smartphones, and it's time for Apple to meet these potential customers where they're at.

Go where the people are

Apple has long prided itself on creating and selling products people didn't even know they wanted. But so far, Apple's missed the boat when it comes to giving people in the developing world a smartphone they already want, and Google (NASDAQ:GOOGL) has stepped in to fill the need. In 2012, the Android operating system commanded 68% of the global smartphone market share, while Apple trailed with only 19%. 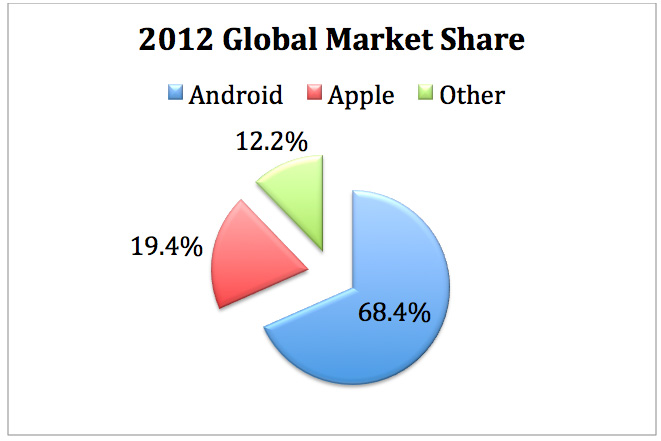 This is clearly a bad thing for companies in the "other" category, such as Microsoft and Blackberry, but it's not great news for Apple, either. Its high-end smartphone approach has made the company a lot of money, but its market share in countries like the U.S. can't continue to grow indefinitely.

A recent NPR article said that the next billion people who will get online for the first time are likely to do so on a mobile device. Companies using Google's OS have produced a massive number of smartphones around the global, with half a billion Android units shipped in 2012 alone. Apple is behind the game when it comes to the developing world, and it's likely that the current iPhone prices are holding them back.

It's all about the Benjamins
One of Apple's hurdles to gaining global mobile market share in developing countries is that most phones sold in the emerging mobile markets are unsubsidized phones. Apple's iPhone 5 sells for about $650 with no contract and even the iPhone 4S is $550. It's estimated that people in developing countries can afford smartphones in the $50  price point, the same price as the iPod Shuffle. 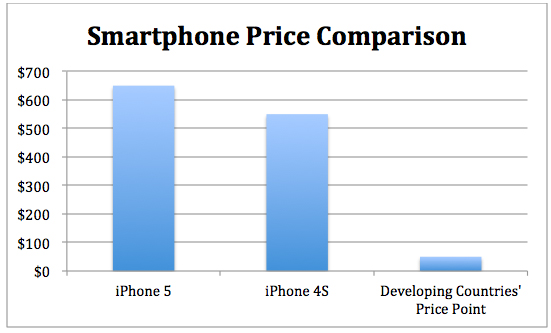 You could argue that Apple sells high-end products and it's not willing to sacrifice quality in order to expand its market share, but there are ways to create an economical iPhone. Apple made cheaper iPods after the popularity of the device took off. The company also just released a smaller, cheaper version of the iPad. The same efforts could (and should) be applied to the iPhone.

There have been rumors about a smaller and cheaper iPhone for years, and it's just like Apple to appear to ignore a market and then release a dynamite product that leapfrogs the company ahead of its competition. So investors shouldn't be worried quite yet that Apple hasn't released a cheaper iPhone, but they should be looking for it. The rest of the world is already (and will continue) buying inexpensive smartphones. It's time for Apple to offer them a new alternative.