Sir Issac Newton's gravitational theory is summed up in one sentence: What goes up, must come down. When it comes to economic theory, though, we also assume that if the price on a limited commodity goes down, then it must go up at some point. In the case of natural gas prices, companies on both the winning and losing sides of the shale gas boom are anxious to know when the party (or plight) will change. Lets take a quick look at where natural gas prices are, where they are going, and how it should affect your portfolio decision making.

Companies from both sides of the aisle
The shale gas boom of the past 18 months or so has sent reverberations throughout the U.S. energy markets. Without sufficient demand for this product, spot prices went on a steady decline all the way down to 12-year lows back in April of last year. This has has a profound effect on several companies, and not always in a good way. There are three major industries that have been hit the hardest by low natural gas prices: natural gas producers (think Chesapeake Energy (OTC:CHKA.Q)), coal producers (Peabody Energy), and utility companies that don't have many natural gas operations (Excelon (NYSE:EXC)). 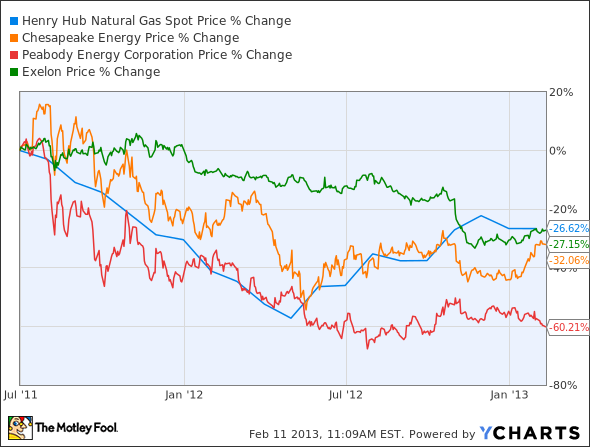 On the other hand, both chemical companies and manufacturers have had a pretty impressive run thanks to cheap feedstocks. Companies like LyondellBasell and Terra Nitrogen, which both use natural gas as a feedstock for plastics and nitrogen fertilizers, respectively, have seen impressive margins in these past couple of quarters thanks in large part to these low gas prices. 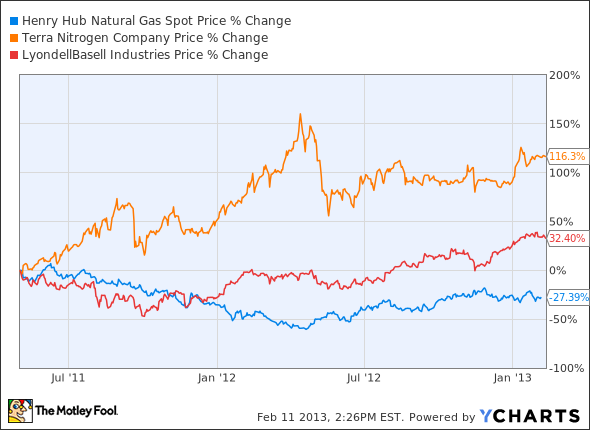 Which firms' activities could lead to price increases?
So how long can we expect natural gas prices to stay down? Surely the prices for a limited resource cannot stay low for long. For this to happen, we will need to see a major uptick in domestic consumption, export volumes, or a combination of both. There is some momentum for both of these directions. Cheniere Energy (NYSEMKT:LNG) has locked in long-term contracts to export 2 billion cubic feet per day of natural gas to foreign markets, and both Clean Energy Fuels (NASDAQ:CLNE) and Westport Innovations (NASDAQ:WPRT) are spearheading the movement to make natural gas a viable transportation fuel in the U.S. If and when these ideas start to take hold, expect natural gas prices to grow right along with these companies.

Based on current prices for natural gas futures contracts, this may take longer than some expect. 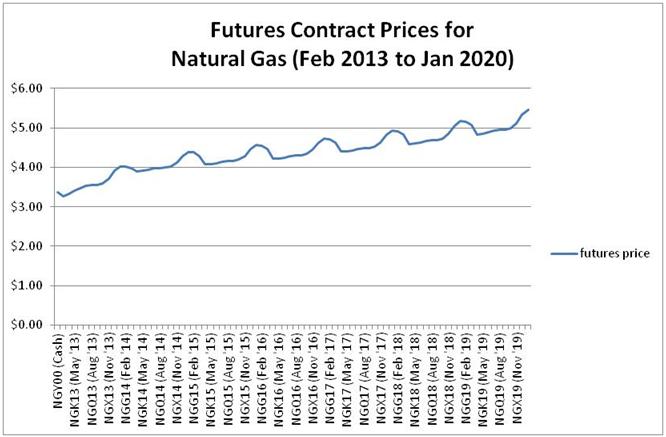 The problem with relying on exports and new demand as a catalyst for higher gas prices is the time associated with these ideas. Cheniere does not expect to make its first delivery of exported natural gas until 2015, and it will surely take even longer for any company to build out an infrastructure to make natural gas a comparable replacement to gasoline as a transportation fuel. So, unless there are any major shifts in domestic production in the next couple of months, don't expect prices for natural gas to change too dramatically.

What a Fool believes
The natural gas party will not last forever. As long as there is a disparity in energy prices, either between domestic and foreign markets or between comparable energy sources, there are companies out there that will look to take advantage of the situation, which will ultimately bring prices to an equilibrium. This means investors could potentially jump into companies that are down on their luck because of low natural gas prices and then ride them for the long term.

While the theory behind investing in the natural gas losers makes sense, keep this in mind: The timeline for these improvements could be longer than many expect. For many of these companies, it makes more sense to try to shift their business strategies for the time being rather than hold out for higher gas prices. Chesapeake energy has done so by shifting its production more toward liquids and oil rather than gas only, and Peabody Energy has gone to great lengths to secure long-term export contracts so it can send its coal overseas.  Moves like these, ones that show a company's ability to shift its strategy when new market conditions present themselves, will lead to much better outcomes than waiting for natural gas prices to rise.