The biggest biopharmaceutical companies blazed trails and lifted portfolios last year. Why the excitement? Meeting or beating revenue and earnings expectations always helps, but that's only part of the reason for shareholder optimism. Investors are now tantalizingly close to (potentially) lucrative new revenue streams as leading drug candidates near the end of phase 3 trials.

The stakes are high and futures are bright, so it is difficult to pick just one. So first, let's review the past year for this growth-hungry group.

Patience never paid so well
Sometimes the shares of larger, more complex pharmaceutical companies move sideways as investors wait for results to trickle in from crucial trials. But where's the fun in that? All of these biotech companies smoked the S&P 500 in the past year: 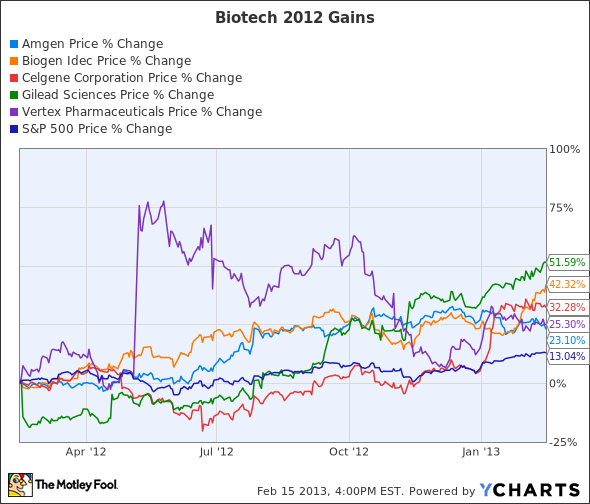 Each company saw shares gain at least 23% while growing sales at least 8.5%. A solid argument can be made that each company will continue to outgrow the S&P 500 over the next several years, but after carefully weighing all of the variables, I believe Celgene tops the list. Here's why.

Best of the bunch: Overview
Considering that Celgene has soared 27% already in 2013, investors may be wary of getting in at current prices. But with the exception of Vertex, all of the preceding companies are hovering near 52-week highs. In fact, I think Celgene could be a steal at a P/E of just 20.

What makes the company so special? I believe it's just the right size -- not too big, not too small -- to capitalize on future opportunities. It enters 2013 with more momentum than the old-guard representative Amgen, is growing at a faster clip than Biogen, and is more diversified than Gilead. I also can't ignore the fact that Celgene is expecting news and data from double-digit phase 3 trials this year. That's a rare feat for a pharmaceutical company of any size. By contrast, Amgen is expecting "data from eight pivotal programs by 2016."

Best of the bunch: Pipeline
The company's leading drug, Revlimid for multiple myeloma, chugged along to the tune of 17% growth in 2012. That doesn't happen very often for a big blockbuster, but it may just be the beginning. I recently noted that Decision Resources, a health-care advisory firm, thinks Revlimid could capture an additional $1.6 billion in sales from combinational therapies by 2021.

Celgene's pipeline (link opens a PDF) is incredibly well positioned and is constantly being refreshed. Pomalyst recently received approval for use in patients who failed to respond to other multiple myeloma therapies. The approval represents a small target population but will help the company cement its presence in the market along with Revlimid.

Data for expanded indications of Revlimid, Abraxane for pancreatic cancer and metastatic melanoma, Apremilast for psoriatic arthritis and psoriasis, and Vidaza for myeloid leukemia are all due this year. With a dizzying array of announcements to look forward to, how can you go wrong?

Risk remains
Well for one, approval is not guaranteed. That may be less of a concern given that Revlimid is well understood and Abraxane and Apremilast have already met statistical significance in several of their trials. But even after approval, each drug has to maneuver market forces and competition. For instance, Apremilast faces tremendous competition in the rheumatoid arthritis market from Enbrel and Remicade.

It is also a little worrisome to see Revlimid make up 68% of the revenue pie. Management calls for double-digit growth this year, but unforeseen challenges -- a manufacturing problem, for instance -- could severely dampen the company's short-term outlook. On the other hand, there's nothing wrong with riding your rocket ship while you can.

Runners-up: buyer beware
Before we discuss the photo-finish for second place, let's dismiss the laggard of the group, Vertex. It is the smallest, youngest, and riskiest investment of the bunch, with just two major drugs on the market. Incivek for hepatitis C and Kalydeco for cystic fibrosis brought in 83% and 11% of total revenue last year, respectively. Overreliance on one or two drugs is to be expected from a relatively new biotech company, but it does offer some cause for concern.

A fleeting glance at earnings shows that Incivek sales increased $209 million in 2012. However, the drug was approved in May 2011, meaning that monthly revenue actually dropped 29%. Vertex acknowledged that patients are waiting for newer, non-injectable therapies to hit the market and is developing its own all-oral treatment. The trials complement a phase 2 trial for rheumatoid arthritis, but investors may have to wait years for any data from the pipeline.

Can we have a three-way tie?
Meanwhile, Gilead is one of the reasons Incivek has fallen. The company recently announced that its new, all-oral hepatitis C drug achieved 100% cure rates -- good enough to corner the market with a similar next-generation therapy from AbbVie. The news fits well with an antiviral line that brought in $8.14 billion last year, a recently approved drug (Stribild) that has billion-dollar potential, and a cardiovascular franchise that grew 28% in 2012. All things point to a bright future for Gilead, but it is too reliant on antivirals (86% of sales) to claim the top spot.

Biogen closely mirrors Celgene in terms of size, revenue, and growth, but it has only four products on the market (compared with six for the latter). Of those four, only two recorded more than $60 million in sales. The company's prospects took a hit in early January, when its phase 3 trial for a form of sclerosis failed across the board. Nevertheless, the company sees promise in three promising compounds in the late-stage pipeline.

Amgen may be an older company, but don't think it can't keep up with the young guns. The company boasts as many blockbusters (six) as Vertex and Biogen have approved therapies combined. An increasing focus on biologics in 2012 saw free cash flow increase 15% over 2011 and, I believe, set the company on the path to a bright future.

Foolish bottom line
Given the amount of upcoming binary events, the market could get a little carried away with Celgene, so investors may want to avoid jumping in on a big pop. There could be some big movements throughout the year in either direction, but overall I believe the volume of trials will insulate the share price from any one or two failures. However, if failure becomes the theme of 2013, then investors will have to step back and readjust their growth estimates for the company. Failures will hurt, but investors may be comforted by management's expectations for its current lineup: growth of 11% to $6 billion in sales this year.