In late 2011, I wrote that that J.C. Penney (OTC:JCPN.Q) was "a disaster waiting to happen." At the time, I pointed to broad macroeconomic trends and poor cash management as negatives that justified a stock price significantly below the trading price at the time of $33.69. Former Apple retail guru Ron Johnson had just taken the helm as CEO of J.C. Penney then, and in January 2012, he unveiled a bold plan to revitalize the company. J.C. Penney stores would be split into a collection of 100 brand-oriented shops, and J.C. Penney would move to an everyday pricing model.

Through a combination of gross margin improvement and cost cuts, J.C. Penney expected to deliver GAAP EPS of at least $1.59, and non-GAAP EPS of at least $2.16 in 2012. Longer-term, management planned to reduce operating expenses to 27% of sales through $900 million of cost cuts and higher revenue. However, since outlining this plan a little more than a year ago, everything has gone wrong for J.C. Penney, and shares have plummeted. 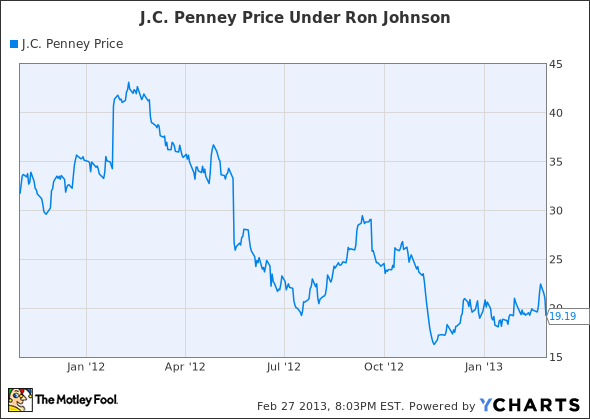 On Wednesday afternoon, the company released yet another dreadful earnings report. J.C. Penney's business has deteriorated so much over the past year that it's becoming increasingly plausible that the company will never recover.

A disastrous quarter (and year)
The fourth quarter is usually a seasonally strong period for department stores. However, this was not the case for J.C. Penney this year. The company experienced a stunning comparable-store sales decline of 31.7%, while gross margin dropped to 23.8% (compared to a long-term target of 40%). The company lost $1.95 per share excluding special items, far below the average analyst estimate for a loss of $0.18 per share. J.C. Penney actually lost more money in the fourth quarter than in the previous three quarters combined.

For the full year, J.C. Penney's adjusted loss of $3.49 per share (and GAAP loss of $4.49 per share) fell far short of management's original goal for a full-year profit. Furthermore, while management hoped that the opening of the first set of brand shops in J.C. Penney in August would begin to revive sales, the drop in revenue has actually accelerated over the course of the year.

Lastly, J.C. Penney produced negative operating cash flow of $10 million in 2012, despite reducing inventory by $600 million, delaying payments to vendors, and making no pension contributions during the year. J.C. Penney cannot reduce its inventory much further, and payment terms are unlikely to improve any more in 2013. Barring a quick turnaround in the business, these headwinds will cause J.C. Penney to see further cash outflows this year. This, in turn, will make it hard to fund capital investments (the company spent more than $800 million in 2012 to build out the new "shops").  If cash runs low, the company will need to slow its transformation dramatically, raise debt (which may be impossible given J.C. Penney's deteriorating credit metrics), or issue additional stock, which would dilute the holdings of current shareholders.

No fix in sight
On several occasions, J.C. Penney executives have pointed out that the cost reduction program has worked as planned. The company's problems have been entirely on the revenue side: lower sales and lower margins. Based on management's original guidance for a non-GAAP profit of $2.16, and the actual full-year expense figures, J.C. Penney needed to generate slightly more than $6 billion of gross margin in 2012 to meet its target. (Gross margin is total revenue minus the cost of goods sold.) The company fell short on this metric by nearly $2 billion.

In a best-case scenario, this will take many years to accomplish. The consumer spending environment in the U.S. is weak, at best, which has led to modest sales growth forecasts from retailers across the price spectrum. Retailers like J.C. Penney that cater to lower-income and middle-class shoppers, such as Wal-Mart  and Target , have been "investing in price" by lowering prices to attract customers . Even with these price reductions, those companies are expecting low single digit comparable store sales growth this year.

This added competition (in the context of a weak spending environment) will prevent J.C. Penney from achieving its goal of 40% gross margin for at least the next few years. The company is bringing in new brands this year, like Joe Fresh, Michael Graves, and Disney, in an attempt to move J.C. Penney up-market. In the long run, this could help gross margin, but it will take some time for J.C. Penney to build awareness of its offerings and attract new customers.

An additional headwind for gross margin is that Ron Johnson has reluctantly decided to bring back sales and coupons (though there will still be fewer of each ). While the discounts will not be as deep as was historically the case, offering 20%-30% off already low "everyday" prices will likely keep gross margin improvements modest for the next year or two.

Conclusion
J.C. Penney's year of transformation went about as poorly as it could have gone. With revenue down nearly 25% for the year, and a pre-tax loss of $1.5 billion, J.C. Penney appears to be far from turning itself around. The stock's struggles are likely to continue, because it is unclear when and if the company will be able to return to profitability. There are much better investments elsewhere in the retail sector.