Just before the end of 2012, I introduced Fools to five companies that I thought they should stay away from -- or even short -- during 2013. Now it's only been two months, so drawing any conclusions at this point is absolutely ridiculous. Though I said investors should avoid these companies for 2013, my investing timeline is usually a minimum of three years.

That said, the average return of these five companies so far is 25%, far outpacing the S&P 500's 2.7% return. Put simply, if you took my advice back in December, I wouldn't blame you for cursing my name when you check your portfolio.

Below, I'll be diving into three of the companies on my list -- specifically the three brick-and-mortar chains that I thought were meeting their end -- and explain where my thinking is now with them. Read all the way to the end and I'll offer up access to a special premium report on the No. 1 stock I think you should avoid for 2013.

A revival of brick-and-mortars?

Maybe I was a little behind the times when I selected three brick-and-mortar stores to put on my chopping block. hhgregg (NYSE:HGG), Best Buy (NYSE:BBY), and RadioShack (NASDAQ:RSHCQ) were all reeling in 2012, down an average of 60% between the three of them.

Since then, the companies' stocks have defied gravity. 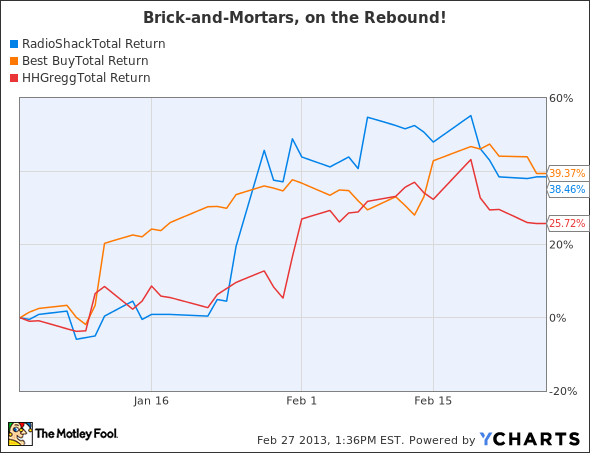 A look at what earnings have told us
At the end of January, hhgregg -- which focuses on differentiating itself by opening large clusters of stores within select cities and offering superior customer service -- came out with earnings that impressed investors, as shares jumped over 20% in the two days following the release.

Apparently, not-that-bad news is enough to send shares sky-high for a company with low expectations. For the last nine months of 2012, sales at stores were slightly down, while earnings per share plunged 39%. The plunge was the result of advertising and general expenses far outpacing flat sales. Most concerning was that comparable-store sales fell 8.3%, while the company saw video sales -- which account for more than one-third of all revenue -- fall over 21%.

Next up is Best Buy. The company hasn't yet come out with earnings, but it has released a couple of important details. On the negative side, comparable-store sales during the holiday season were flat domestically, and fell 6.4% abroad. But that news was balanced out with ComScore and Experian stating that Best Buy's website was one of the three most trafficked websites on Black Friday and Cyber Monday, respectively.

That's important news, as the basis for my bearishness on the company is that e-commerce companies -- most notably Amazon -- will be the death of brick-and-mortar outfits. Until the company releases earnings -- which are expected to come out before the market opens on Friday -- it will be hard to tell if the company's rebound was justified.

Finally, we have what I'm calling the No. 1 stock to avoid in 2013: RadioShack. There are basically two story lines to follow here. The first is that results continue to be abysmal. Earnings came out this week, and the company missed on both the top and bottom lines. During the fourth quarter, same-store sales fell 7% -- accelerating a yearlong trend.

And yet, the stock has climbed significantly since these results were published. As fellow Fool Blake Bos points out, a lot of this has to do with faith being shown in new CEO Joe Magnacca's plans to turn the company around.

So am I changing my mind?
The fact remains: A lot of these jumps are either based on hope or not-terrible results; from where I sit, none of this is due to tangible results... yet.

If there's one trend that's been accelerating since the new millennium, it's the use of the Internet to get shopping done in North America. That said, online sales accounted for only 9% of all sales in the United States in 2011, and it will surely never get anywhere close to 100%. But the overall trend is undeniable, and the trend is not the friend of certain industries: none more so than big-box retailers.

Though I will admit that it's impressive to see Best Buy do so well in e-commerce, and that Magnacca could do a great job in turning things around at RadioShack, I'm still maintaining my bearish CAPScalls on my All-Star CAPS profile for these companies.

Was I Wrong About Brick-and-Mortars? @themotleyfool #stocks $RSHCQ $BBY $HGG Next Article
Current