Do good things come in small packages for big pharma? Most of investors' attention is given to blockbuster drugs and drugs that have the potential to be blockbusters. Should we be thinking smaller, though?

I explored the impact of blockbuster drugs on several big pharmaceutical companies recently and concluded that investors should pay more attention to the lesser drugs in companies' portfolios. My Foolish colleague Brian Orelli had a similar message in one his recent articles. Brian's premise is that the blockbuster model is breaking. He cautioned that investors need to prepare for a largely post-blockbuster world in pharma.

With all of this in mind, I decided to take a look at how big pharmas with more smaller-dollar drugs have fared and which companies seem best positioned for the future assuming blockbuster drugs become less important. Here's what I found.

The power of "other"
Every pharmaceutical company plays up the success of their major money-making drugs. Most of them take pains to explain why the drugs achieved solid gains or experienced losses in a given time period. Drugs that aren't bringing in as much revenue are listed but don't typically receive much attention. Then there's the group of drugs that aren't even mentioned by name. These drugs are lumped together in an "other" category.

My focus was these "other" drugs. With so many big pharma companies losing revenue from blockbuster drugs going off patent, I suspected that the ones with more of the "other" lower-dollar drugs would tend to perform better. The thought was that having a solid revenue stream from a large mix of lesser drugs could help cushion some of the blow from the patent cliff and therefore lead to better stock performance. Was my hunch on target? 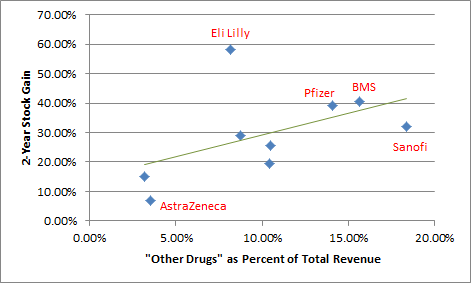 AstraZeneca (NASDAQ:AZN) had the second-lowest "other drug" revenue percentage and came in with the lowest two-year stock performance. Sanofi (NASDAQ:SNY), Bristol-Myers Squibb (NYSE:BMY), and Pfizer (NYSE:PFE) ranked at the top of the list in terms of other drugs as a percentage of total revenue. These three companies also were in the top four with respect to stock performance.

Eli Lilly (NYSE:LLY) jumps out as an outlier, though. The company actually ranked first for stock performance, with shares climbing 58% over the past two years. However, Lilly was in the bottom three for other drugs revenue. The perception that Lilly was a better buy could have been a factor in its outperforming the others in share gains. The company's earnings yield was consistently higher over the past couple of years than Sanofi's or Bristol's.

Wagging the long tail?
Chris Anderson popularized the term "the long tail" several years ago with his book by the same name. His theory (and subtitle of his book) was that the future of business was in selling less of more. There are always exceptions, of course, but I think that we will see the long tail effect manifest itself more in the world of pharmaceuticals in the years ahead.

Let's assume that this scenario does play out. If it does, which big pharma companies are in best position to thrive? Those already ranking high in terms of other drugs percentage of total revenue have the highest likelihood to do well assuming our underlying premise. However, the number of new drugs in the pipeline will also be key. Let's examine this angle for our top three companies. 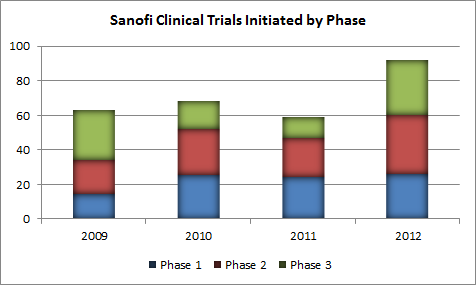 Sanofi held relatively steady in terms of trials initiated until 2012. However, the company had a major push last year. The number of late-stage trials initiated grew significantly compared to the prior two years. 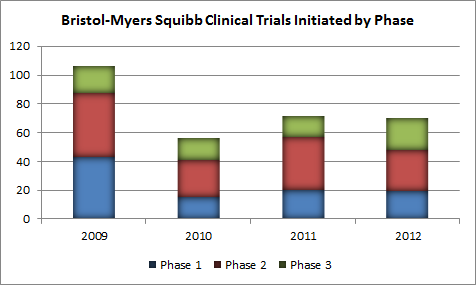 Bristol-Myers Squibb is still well off of its peak from 2009, but the company has generally increased the number of new clinical trials initiated over the past three years. Bristol's pipeline volume doesn't look quite as strong as Sanofi's, but we should also consider that Sanofi is a much larger organization in terms of annual revenue. 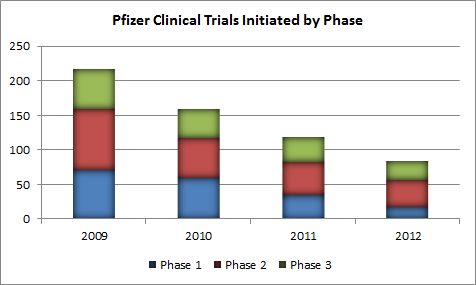 The volume of clinical trials initiated by Pfizer has been on a downward slope in recent years. However, look at the high numbers from 2009 at the beginning of this decline. Even with the drop, Pfizer still ties with Sanofi in the number of phase 2 and phase 3 trials initiated in 2012 and exceeds that of Bristol.

These numbers don't tell us the probability of drugs in these trials ever making it to market. Also, some of these trials are for new indications for current blockbuster drugs. However, in general, higher volumes of drugs in the pipeline should translate to more new drugs eventually approved.

Thinking smaller
We can't really just look at the volumes of "other" drugs and make predictions of stock performance. However, I would maintain that the quantity of smaller drugs in a pharmaceutical company's arsenal is and will continue to be an important factor for investors to consider. Diversification works with drug portfolios in the same way it works for stock portfolios.

Big is still beautiful. Companies with multiple blockbuster drugs that are growing sales (and have several years of patent protection) should continue to be the stars of the pharma world. But pharmaceutical companies that also can count on solid revenue coming in from those other drugs that don't get the limelight should be the best picks for investors. Thinking smaller could be big for big pharma.