Shares of the optical networking equipment vendor jumped as much as 17.6% overnight thanks to this morning's terrific earnings report. The company reported $0.12 of adjusted earnings per share, up from a $0.17 loss last year and way ahead of the $0.17 loss per share that analysts were expecting. Sales that came in 9% higher year-over-year also beat Wall Street's targets.

The company is enjoying a surge of orders from the telecom sector, setting the stage for an industrywide rebound. North America is coming on strong as service providers shift into next-generation 4G networking at an accelerated pace, and even Europe is coming around. "We're seeing a lot of activity and opportunities within some of the big tier ones around the globe," said CEO Gary Smith.

That's why the report worked wonders for Ciena's ecosystem of rivals and component suppliers as well. 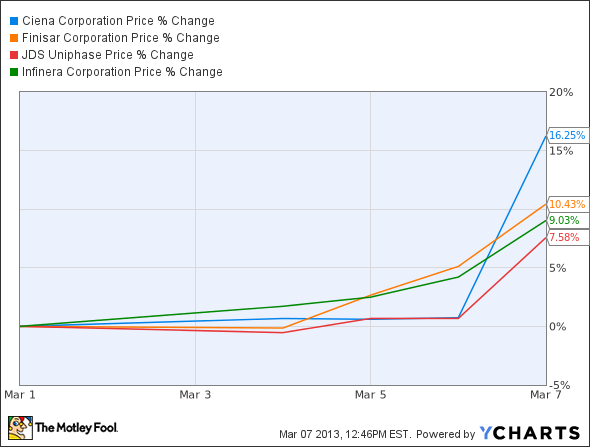 Components provider Finisar (NASDAQ:FNSR) took an 8.9% leap just ahead of its own earnings report after tonight's closing bell. Finisar's quarter will either confirm or debunk Ciena's market view. Investors are betting on the "confirm" line, and I'm inclined to agree.

Fellow optical specialist JDS Uniphase (NASDAQ:VIAV) soared as high as 8.4% on Ciena's end-market signals. Infinera (NASDAQ:INFN) saw a smaller but still significant 6.4% surge. Both companies are coasting along right in the middle of a reportable quarter, and won't provide solid answers until the end of April.

Investors here should keep a close eye on Finisar tonight, because simultaneous good news from not one but two of the industry's most central players would inevitably trickle down to the other majors as well.