Yesterday, the release of the results from the Federal Reserve's annual stress tests highlighted the impact of the changing regulatory and operating environment on firms like Goldman Sachs (NYSE:GS) and Morgan Stanley.

While these capital markets-focused firms undergo the same tests as the large depository institutions like Bank of America and Wells Fargo, investors cannot use these stress tests results as an apples-to-apples comparison for these bank holding companies.

Ranging from high to low
Despite posting strong operational results through 2012, Goldman Sachs entered this year's stress tests with a very similar capital position compared to last year. The megainvestment bank increased its Q3 Tier 1 common ratio 100 basis to 13.1% in the 2012. The main purpose of the Fed's stress tests is to examine the how these institutions would fare if the domestic and global economy experienced another scenario similar to 2008 and 2009. In the "severely adverse" economic scenario, which included a sharp contraction in Europe and developing Asian markets, Goldman's Tier 1 common ratio crippled to a minimum of 5.8%, the same levels it fell to in last year's tests. 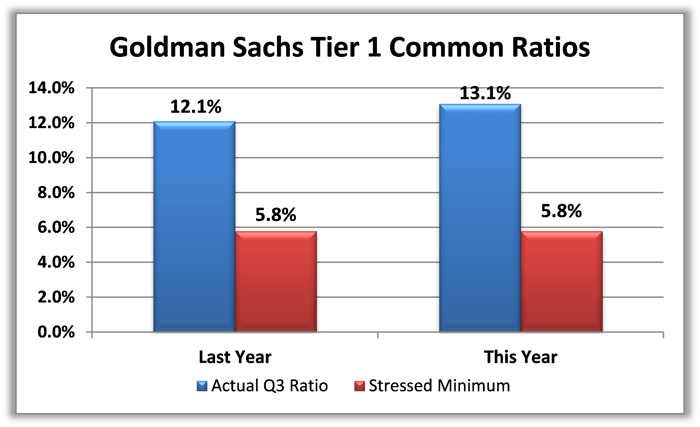 Risky business
The six bank holding companies with significant trading operations, including Goldman, were subject to scenarios that exposed additional counterparty risk and markdowns on assets. The Fed's scenario projected Goldman's performance over a nine-quarter period and projected a total loss of over $20 billion under the severely adverse conditions. While this additional stressor negatively impacts the behemoths with trading arms like JPMorgan Chase and Bank of America, the firms without large consumer bases are likely to feel this impact to a greater extent. 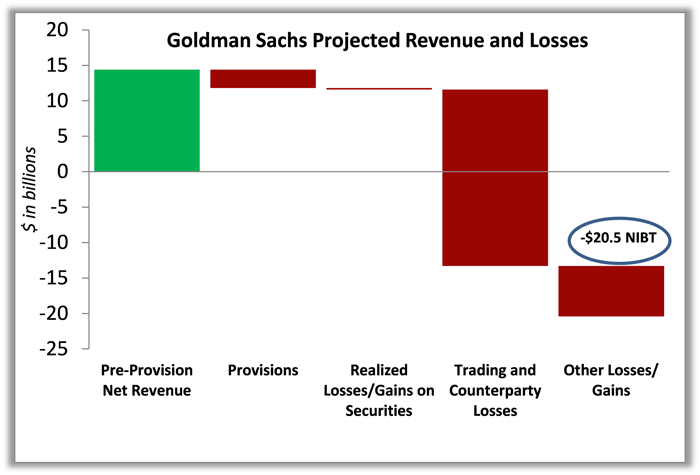 Another increase?
Despite the drastic deterioration of capital levels in the Fed's doomsday scenario, investors should note that although Goldman posted similarly depressed capital levels last year, the stock more than doubled the return of the S&P 500 since the release of the previous stress tests. In 2012, Goldman Sachs increased its dividend for the first time since 2005, despite the stress tests' results. Next Thursday, the Fed will release Comprehensive Capital Analysis and Review (CCAR) results, which will look very similar to these results but will take into consideration any of Goldman's proposed increases in dividends or share repurchases.