Please ensure Javascript is enabled for purposes of website accessibility
Log In Help Join The Motley Fool
Free Article Join Over 1 Million Premium Members And Get More In-Depth Stock Guidance and Research
By Morgan Housel - Mar 8, 2013 at 11:30AM

Markets award those who are patient.

After the Dow Jones (^DJI -0.86%) hit a new record high this week, more than double off its 2009 lows, the Wall Street Journal published one of the most inevitable headlines of all time.

"Market Rewarded Those Who Stuck It Out," it read.

For those who stuck out for the last five years, the 2008 crash -- literally one of the sharpest wealth destroyers in history -- is now a set of painful memories at worst, and a once-in-a-lifetime opportunity at best. If you did nothing, your portfolio is likely larger today than it was in 2007. If you bought steadily over the last five years, it's probably much larger. Only if you sold near the bottom and hid somewhere else have you lost money.

History is clear on this: Hold stocks for a long time, and your odds of making money are very high. Since 1871, there have only been four periods when an investor purchasing stocks didn't make money in real (inflation-adjusted) terms over a 10-year period: 1908, 1929, the late 1960s, and the late 1990s: 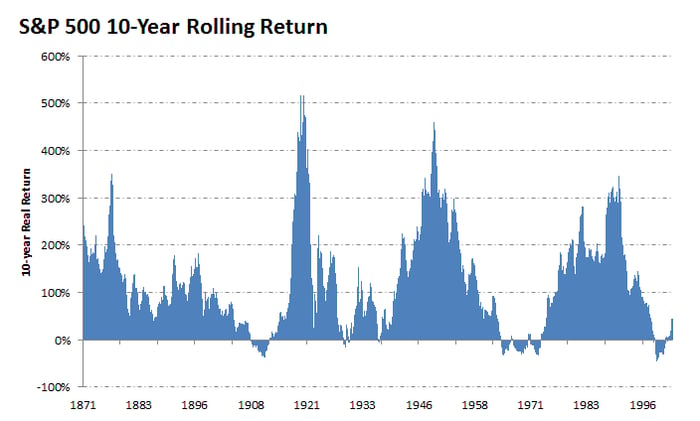 If you purchased stocks once a month, every month, since 1871, 87.8% of your purchases would be profitable 10 years out, even adjusted for inflation. The four brief periods that left you in the red after a decade were invariably followed by above-average returns. That period includes the aftermath of a civil war, two world wars, a flu pandemic, terrorist attacks, droughts, presidential assassinations, depressions, recessions, crippling debts, bank runs, high inflation, deflation, oil embargoes and a dozen bubbles. Through it all, the market rewarded those who stuck it out. It is the same story time and time again. It was no different this time around, and it will likely be no different next time around.

What else did we learn of the last five years? One of my favorite quotes from investor Jeff Gundlach is, "In risk assets, you make 80% of your money 20% of the time."

Sure, if you missed the 20 worst trading days, you would have done much better. But most of the 20 best trading days and the 20 worst trading days happen during the same periods, often during the same months. No one can time the market so perfect as to jump in and out at the exact right days. So what happens is that those who try to avoid the market's big drops tend to miss the market's even bigger gains. Those who sold when the Dow was at 8,000 may have thought they were smart when it continued to fall to 6,000. But when, before they knew it, it was back above 10,000, 12,000, 13,000, 14,000 ... and their attempt to time the market ended up costing them serious money. If you want to consistently enjoy the market's big gains, you have to put up with its declines from time to time. Trying to avoid that reality is one of the surest ways to earn poor returns. This, too, is the same story over and over again.

One lesson from the past five years is that the single most important question an investor can ever ask is, "How long am I investing for?"

My view is that money you'll need to access within five years shouldn't be in the stock market at all, and money you won't need for at least a decade should not only be in stocks, but invested with the view that at some point it will almost certainly lose half its value (temporarily). Volatility is just part of the deal. It's perfectly normal.

If you know you're investing for the long haul, these ups and downs -- even a severe crash like 2008 -- take on a whole new meaning. I think a lot of why so many investors cashed out and hid on the sidelines over the last five years is because they never even asked themselves how long they were investing for. A young worker with three decades before retirement saw markets falling, and his first instinct was, "Get out, now!" when it realistically should have been, "Look, never before in history has an investor lost money in stocks on a 30-year basis. And stocks are cheap right now. Even if they go down much further, it doesn't make sense to sell." On the other side, near-retirees found themselves caught off-guard when money they needed now suddenly lost half its value. So asking yourself how long you have to invest goes both ways. What's important is that there is never a blanket definition of whether or not you should buy stocks right now. Who you are and how long you have to invest can create two different rational answers at the same time.

Someday, this will all happen again. More recessions, more crashes. And when it's all over, the same headline -- "Stocks reward those who stuck it out" -- will be published yet again.

Morgan Housel has no position in any stocks mentioned. The Motley Fool has no position in any of the stocks mentioned. Try any of our Foolish newsletter services free for 30 days. We Fools may not all hold the same opinions, but we all believe that considering a diverse range of insights makes us better investors. The Motley Fool has a disclosure policy.