It's been a long six months for Apple (NASDAQ:AAPL) investors, myself included. Amid the company's well-documented pullback from its September highs, investors have continued to get cut while trying to catch the falling iKnife.

How wrong my fellow Fools and I have been so far each and every time, as shares have proceeded to tap a fresh 52-week low of $419 just days ago. Along the way, we have noted that every valuation metric in the book is seemingly at rock bottom, but shares just kept getting cheaper. At that low, shares were trading at just 9.5 times earnings and 6.2 times earnings ex-cash. 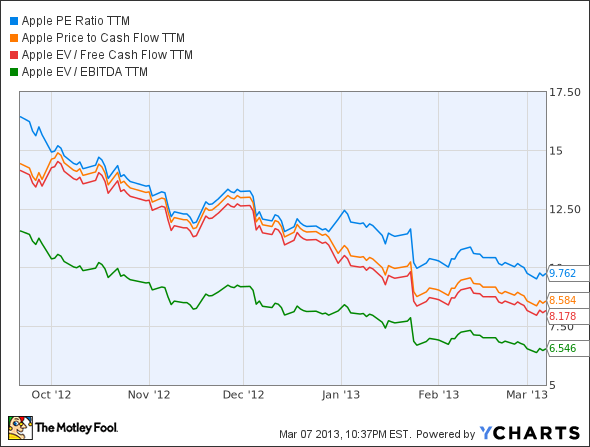 The problem we all share is neglecting the fact that Apple has become a pure momentum stock as fickle traders (both institutions and individuals) pile in and play the swings. Traders, by their very nature, pay little to no mind to fundamentals. After all, if you're holding a position for only days or even hours, what does it matter that fiscal 2014 revenue is forecast at more than $200 billion?

When emotions are firmly in control, trying to value a stock based on fundamentals can prove to be utterly futile in the short term.

Only when you're in an environment where emotion overshadows reason does irrationality begin to make a little bit of sense. There's simply no legitimate way to justify just how far Apple has fallen.

To be fair, Apple absolutely faces some very real challenges in the near term. Samsung has become a formidable rival through a combination of product breadth, sheer size and scale, wide distribution, and a simply breathtaking marketing budget. Apple's current smartphone strategy of focusing on the high end of the market is hitting a ceiling as saturation within developed markets sets in, leading to iPhone growth deceleration.

Competitors in the tablet market are now starting to gain traction, even as the iPad remains the defining device. Investors have grown frustrated with Apple's unreasonably large cash position, which alone is larger than Intel's entire market cap. Margins may never again reach levels seen in 2012, when gross margin briefly flirted with the 50% threshold -- previously unthinkable for a company with substantial hardware operations. 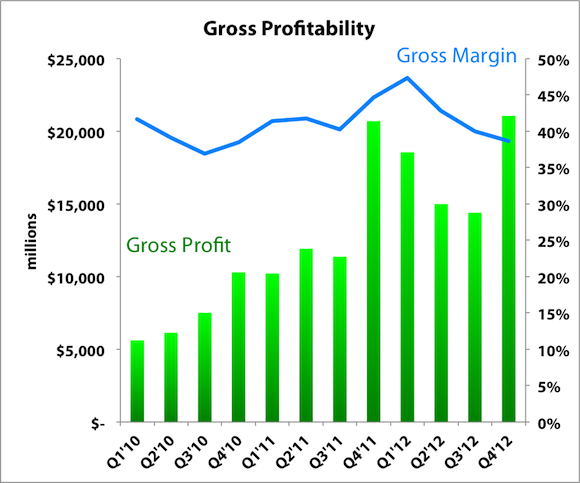 These are all entirely reasonable causes for concern. However, acknowledging it still doesn't properly explain why Apple is getting no respect in the market.

Worse doesn't mean bad
Companies with worse figures than Apple (even after considering the aforementioned risk factors) are still fetching much higher trading multiples than the iPhone maker. Even if gross margins continue declining and stabilize between 30% and 35%, those are hardly bad figures, even if they are worse than the unsustainably high levels of profitability of yesteryear.

Apple is painfully confronting the Law of Large Numbers, since it can't realistically be expected to continue growing at the same rate. Over the past five years, it's posted an average revenue growth rate of 45%. At $165 billion in TTM sales right now, anything below $239 billion in sales over the next year will technically be less than that average.

Even Intel, a company that has a lower net margin and less promising growth prospects going forward, is fetching higher multiples than Apple. All of the concerns facing Apple's business combined still don't make sense of the fact that Apple is one of the cheapest stocks in the market. Apple is now valued alongside grocery stores and department stores that are saddled with debt and plagued with razor-thin margins.

In fact, Apple is now valued within the bottom 6% of the market, even as the company is still one of the greatest cash machines known to man.

Dramatic irony
Just to be clear, I'm fully aware of the irony of this article. I'm know I started by saying fundamental analysis is proving futile right now -- and then proceeded to cite fundamentals. The distinction is that emotions and momentum are short-term factors, while fundamentals are the long-term Fool's tools.

The greatest investment opportunities prove to be the ones where emotions dictate prices, specifically because they disconnect price from intrinsic value. At the height of the financial crisis, patient value investors who bought near March 2009 lows and held on for the wildly emotional ride were greatly rewarded.

Apple is in anything but a financial crisis right now, but it is definitely facing crises of confidence, identity, and maturity. Patient value investors will be greatly rewarded again.