Last week, the Federal Reserve released the first part of the annual banking stress test results, which examined the impact of a severe economic downturn on the largest U.S. banks. While it stood out as one of the strongest banks during last year's stress tests, State Street (NYSE:STT) again posted especially encouraging results. The results highlighted the strength and sustainability of State Street's institutional client-focused business.

How it fared last week
In addition to posting a higher actual Tier 1 common ratio in Q3 in 2012 compared to 2011, State Street posted an impressive minimum Tier 1 common ratio of 12.8% under the severely adverse scenario. During the previous year's tests, State Street's minimum Tier 1 common in the doom-and-gloom scenario was a staggering 15.1% without its proposed 33% dividend increase included. This year's test assumed that elevated dividend remained constant through the nine-quarter stress period, making the 12.8% ratio equally impressive. Regardless of some investors clamoring about the ease of the tests this year, it's hard to deny State Street's balance sheet strength and business prospects.

These strong results have driven investors to tune into the Comprehensive Capital Analysis and Review results, which will be released on Thursday afternoon. Within this release from the Fed, investors will know if the participating banks sought and received approval for any increases in dividends or share buyback programs. Investors will also get to see the impact of any new capital plans on stressed ratios. 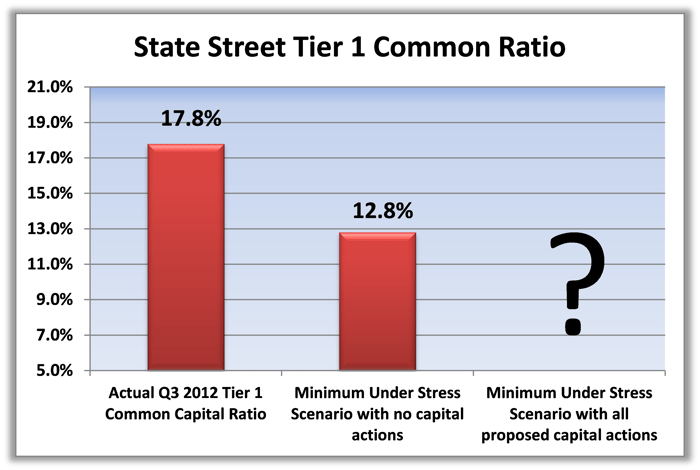 Should State Street request another bump?
Last year, State Street asked and received approval for a 33% increase of quarterly dividend payments. Additionally, the Fed did not reject the company's proposal for a new common stock repurchase program authorizing the purchase of up to $1.8 billion of stock though Q1 2013. State Street ultimately repurchased 33.4 million shares of common stock in 2012 for roughly $1.44 billion, almost $1 billion more than it distributed in the form of common stock dividends. Given the substantial improvement of its balance sheet under a stressed scenario, State Street seems to have ample leverage in negotiating any additional actions to return more cash to shareholders.

How much?
State Street is strong enough to request a substantial increase in dividend, and I believe investors are anticipating a dividend increase and additional stock buyback capacity. The Fed has explicitly said that dividend payout ratios above 30% will receive "particularly close scrutiny." State Street's dividend payout ratio was around 22.5% in 2012, suggesting room for growth. If the Fed and the bank cannot agree on a substantial dividend increase, State Street will likely request an increase of share repurchases, which was its more significant capital action plan in 2012.