One week after the Federal Reserve released the initial results of its bank stress tests -- revealing how 18 of the country's biggest bank holding companies held up under a simulated, severe economic downturn. The nation's central bank has released the final results, detailing which bank's proposed capital plans would be approved, and which would not.

For JPMorgan Chase (NYSE:JPM) shareholders, the news isn't ideal, but it could have been a lot worse.

Back to the drawing board

"The Federal Reserve did not object to the capital plans for [...] JPMorgan Chase [...] but required [it] to submit new capital plans by the end of the third quarter to address weaknesses in [its] capital planning processes." So said the Fed in its official report released today.

Essentially, the central bank is sending JPMorgan back to the drawing board, but only in part. The bank's capital plan will stand, albeit after some reworking. To that end, CEO Jamie Dimon had this to say: "JPMorgan Chase is fully committed to meeting all of the Fed's requirements." So what are JPMorgan's capital actions going to look like?

As you can see from the chart above, JPMorgan is planning to raise its quarterly dividend from $0.30 per share to $0.38 per share, for an increase of 26.6%. 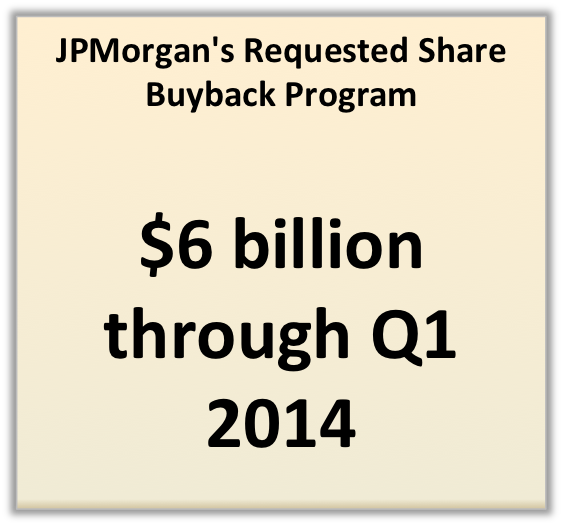 And as you can see on the second graphic, JPMorgan is planning to repurchase $6 billion in common equity through the first quarter of 2014.

Foolish bottom line
The good news here is, JPMorgan's proposed capital action plan is able to move ahead, despite the Fed's reservations regarding the planning process. The bad news is, there's the possibility that the Fed could order JPMorgan to modify its capital action plan if the central bank doesn't like the plan rework the superbank is due to come back with.

But chances are -- being the seasoned, smart bunch of cookies JPMorgan's top managers are -- the bank will calmly and coolly adjust whatever it is the Fed wants adjusted, and will resubmit a capital-return plan and attendant process that will please not only the Fed, but investors as well.

The Comprehensive Capital Analysis and Review isn't perfect -- no testing process is -- but it's nonetheless an important part of keeping our banking system healthy. I'm a JPMorgan investor, and while this isn't the best news I could have possibly heard today -- as its leaving me a bit on edge regarding the proposed dividend increase and share buybacks -- it's probably the right news.