On the back of yesterday's losses, stocks are moderately higher this morning, with the S&P 500 and the narrower, price-weighted Dow Jones Industrial Average (DJINDICES:^DJI) up 0.45%% and 0.53%, respectively, at 10:15 a.m. EDT.

Investors still have an eye on Cyprus. Although the Southern European island state has a bailout in hand, the full ramifications for the eurozone are not yet known, and the situation is fluid -- the Cypriot government announced only last night that banks, which were meant to reopen today, will remain shut until Thursday.

Yesterday, I encouraged investors clinging to asset allocation as the sole determinant of investment risk to throw out their risk framework and embrace a contrarian attitude. This morning, I'm going to give more examples of how to apply that attitude.

The Cypriot bailout has produced a vivid example of the risks associated with banks -- for customers, investors, and creditors. A protracted bank holiday, customers lining up around the block to withdraw money from ATMs, and a massive levy on large bank depositors -- these are unsettling thoughts even for U.S. investors, as they dredge up the fears we experienced at the worst of the financial crisis in the fourth quarter of 2008 and the first quarter of 2009.

Cyprus' bailout debacle is the latest event to reinforce investors' aversion to owning bank shares. Naturally, Southern European banks bear the greatest burden; just have a look at the performance of Spain's two largest banks, Banco Bilbao Vizcaya Argentaria (NYSE:BBVA) and Banco Santander (NYSE:SAN), since March 15 -- the Friday prior to the weekend during which Cyprus came up with its first failed bailout program: 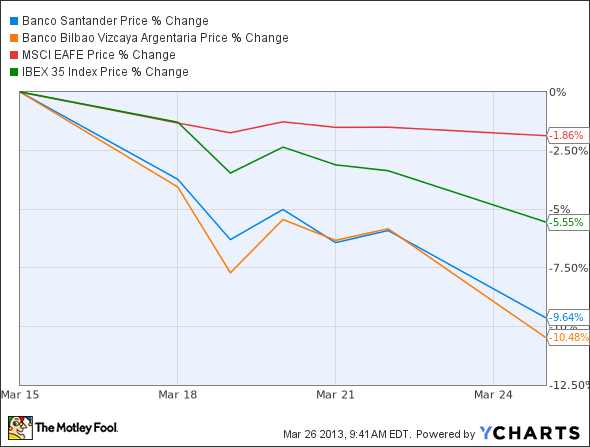 Both shares have woefully underperformed both the MSCI EAFE Index and Spain's IBEX 35 Index. That may be warranted -- to an extent -- as the ultimate impact of Cyprus is not yet clear. However, keep in mind that excessively depressed valuations can mitigate a lot of risk. Both banks trade at a discount to their book values and a relatively modest premium to tangible book values (roughly one-fifth). On an earnings basis, they trade on less than 9.5 times the estimate for the next 12 months' earnings per share.

I'm not recommending that investors rush out and massively overweight their portfolios with these two banks. However, in a situation like this, these are precisely the type of stocks that contrarian, value-oriented stock-pickers should immediately gravitate to. Ultimately, you may decide they're not worth buying, but they're certainly worth a look.