After Hurricane Sandy, there were several opinions that the storm would help boost the economy through spending to rebuild destroyed houses, businesses, transit, and other infrastructure. Fool Jeremy Bowman highlighted why these opinions were extremely wrong:

Economic activity for the sake of economic activity does nothing. If disasters like Sandy actually benefited the economy, then we could just go out and destroy houses on our own. There's no need to wait for Mother Nature.

Now, a few months after the hurricane, we can sift through more data to see just how the storm affected the economy. And as the rational argument predicted, it did not benefit the economy. 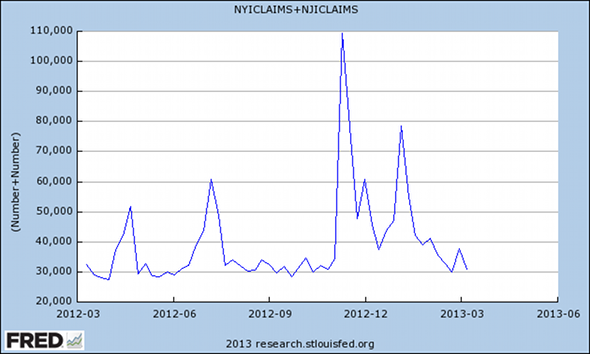 The Federal Reserve Bank of New York writes, "We estimate that roughly 160,000 initial unemployment claims filed in the two states during the month of November were related to Sandy, causing an unprecedented shock to the regional job market." The sector hit the hardest, in terms of jobs, was leisure and hospitality. Using the less volatile payroll numbers taken from the second week of November, the New York Fed found that 32,000 jobs were lost; the difference between the numbers was attributed to a portion of the 160,000 filers finding new work or being able to return to their old jobs.

While the job levels are evening out over the long term, that short-term joblessness pushed plenty of incomes further into the future than expected. And, as any investor knows, money today is worth more than money tomorrow.

Future labor
In addition to today's workers, the storm also disrupted tomorrow's workers. All of New York City's more than 1,700 public schools were shut down for a week, with more than 80 of the schools forced to wait even longer before admitting students and several others relocated farther away, affecting attendance. A week will probably not have much effect on the actual skills the kids learn, but with youth unemployment already a nagging issue, it doesn't help.

Real-estate losses
For those who have to rebuild their homes, dealing with insurance claims can be aggravating. But even for those lucky enough to own an undamaged home in affected areas, average prices have declined by 10%. Additionally, new flood maps are requiring buildings to be updated and raised, lest owners face dramatically higher flood-insurance costs in a few years. As the New York Daily News reports, those who don't comply with new building codes "can expect to pay a steep cost with insurance premiums around $9,500 a year ... compared with $1,410 a year for a homeowner whose house is built at the recommended level." And this means that more money will be paid to cover flood probabilities instead of going to savings, retirement funds, or other goods and services.

Insurance company losses
Even if Hurricane Sandy was a coast away, your insurance company investments might have been damaged. Allstate (NYSE:ALL) reported fourth-quarter net income of $394 million, 45% lower than in last year's fourth quarter. Its fourth-quarter operating income came in 60% lower than last year's, as the company predicted it suffered losses of more than $1.1 billion owing to Sandy. Travelers' (NYSE:TRV) fourth quarter was equally subdued, with a decline in both operating and net income of more than 50% and pre-tax losses owing to Sandy of more than $1 billion. And Chubb (NYSE: CB) reported a 75% decline in net income, with $882 million in Sandy losses accounting for more than $2 lost in earnings per share. Without Sandy, and with a constant price-to-earnings ratio, Chubb's share price would be more than 30% higher.

Plenty of costs, very few benefits
These are only a few of the economic costs, and they still fail to consider the storm's toll on human welfare. While some money was put into gas-fueled generators, wood, and other goods that helped people weather the storm and rebuild, the net effect on the economy is not positive.