The recession that began in 2007 left lasting scars on the American economy. One seems to be that we are driving less.

A lot less, too. Total miles driven in the U.S. peaked in 2007 at a touch above 3 trillion a year. The latest figures from January put us at 2.95 trillion miles per year. That may seem like a trivial decline until you put it into historic context. It is, without doubt, the longest America has gone without growing our time on the road in at least four decades: 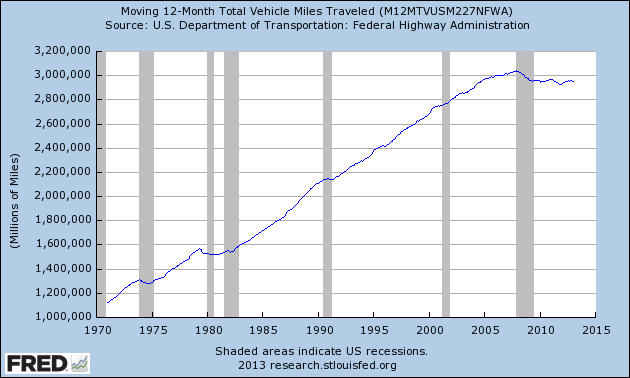 The decline is even larger when adjusted for the size of the population. Annual driving per capita has declined nearly 8% since 2005, or double the decline experienced during the recession of the early '80s.

What's going on? There are four standard explanations, some more convincing than others.

The most obvious is the economy. Nine out of 10 workers drive to work, according to the Census Bureau. As employment fell by 9 million between 2008 and 2010, the roadways cleared up. One study by Texas A&M's Transportation Institute showed the amount of time the average commuter is stuck in traffic fell 13% from 2006 to 2010, with most of the decline taking place during the recession.

But that can't account for all of the decline. Employment has increased by 6 million since 2010, yet we are driving 10 billion fewer miles a year now than we were then. One study focusing on young drivers found: "The trend toward reduced driving ... has occurred even among young people who are employed and/or are doing well financially." And miles driven per capita peaked in 2005, nearly three years before the recession started. There is more to the driving story than a weak economy.

Gas prices are the other obvious culprit. Sticker shock at the pump likely caused most of the dip in miles driven in the '80s, but today it isn't as clear cut. Nationwide average gas prices are lower today than they were two years ago, yet miles driven continue to fall. Adjusted for average wages, gas prices today are nearly identical to prices that prevailed in late 2005, when vehicle miles traveled per capita peaked. The Congressional Budget Office parsed the data more carefully and concluded: "Recent empirical research suggests that total driving, or vehicle miles traveled (VMT), is not currently very responsive to the price of gasoline. A 10 percent increase in gasoline prices is estimated to reduce VMT by as little as 0.2 percent to 0.3 percent in the short run and by 1.1 percent to 1.5 percent eventually."

Rather than cutting back on miles driven, we have adapted to higher gas prices mostly through better fuel economy, which spiked around 2005 after plateauing for two decades.

Another explanation is a shift in where Americans live. Following decades of booming outward population growth from cities into suburbs, the past decade saw the return of urban living. As Reuters reports: "In 2010, a total of 80.7 percent of Americans lived in urban areas, up from 79 percent in 2000. Conversely, 19.3 percent of the U.S. population lived in rural areas in 2010, down from 21 percent in 2000."

Rural areas are more conducive to long drives, so the shift explains part of the decline in vehicle miles traveled.

Lastly, one of the more convincing factors fueling the decline in driving is demographics. This chart, from the Federal Highway Administration, shows how driving differs among age groups: These rates are important because of an underappreciated demographic shift going on in the U.S. As the birth rate fell following the baby boom of the 1950s and 1960s, the population of Americans in their 30s and 40s began declining early last decade. Census data shows there are actually four million fewer "highly mobile" Americans age 34-43 today than there were in 2005, when miles driven per capita peaked. The population of Americans age 74 and up, who drive the least, grew by two million during that period.

All of these shifts create opportunities for Ford (NYSE:F), General Motors (NYSE:GM), and Toyota (NYSE:TM), which have revamped their fleets to adapt to the new American driver. A decade ago, the manufacturer who could deliver the most headroom and horsepower per dollar won. Going forward, the fruits will go to whoever can deliver the most gas mileage and dependability per dollar. It is a new paradigm, for both drivers and car companies.