The U.S. energy renaissance has been one of the bright spots in American industry, and its success has also brought an unforeseen boom in manufacturing. Much of the recent boom has been from unconventional sources such as shale, a resource that wasn't even mentioned in the Energy Information Administration's Energy Outlook Report 10 years ago. Today, it accounts for more than 30% of total natural gas production in the United States.

We aren't the only ones with reserves, but we harnessed these unconventional sources effectively and economically, and we did it faster than any other country. According to a panel of experts at the 2013 Energy Forward Conference, only China will be able to effectively match the U.S. in terms of shale gas production for 10 to 15 years.

Let's take a look at a few reasons we won the shale gas race.

Regulations and governmental structure
Unlike many other countries around the world, the U.S. has a robust system that protects individual property and patents. According to a Wells Fargo panelist at the 2013 Energy Forward Conference, the U.S. is one of the few countries in the world where an individual landowner has mineral rights for anything found on his or her property, and contract rights can be structured for extraction from that individual landowner.

This negotiation process with multiple stakeholders fosters a competitive environment for drilling companies to be as efficient as possible and create the highest rate of return. In the case of most other countries, a drilling company will need to negotiate with a regulatory body for a petroleum contract that will regulate the amount of costs it can recover from drilling operations, and all land negotiations will need to go through that regulatory body, according to Robert Beck of Anadarko Petroleum.

Another reason that shale gas development has not as quickly developed is a lack of clear patent protection laws, especially in China. While both Schlumberger (NYSE:SLB) and Haliburton (NYSE:HAL) have expressed an interest in developing Chinese shale gas, a lack of intellectual-property protection has them hesitant to going all in. Rather, both companies have taken minority interests in smaller, Chinese-based companies and plan to take orders of drilling fluids and equipment. These kinds of moves are not necessary in the U.S. and have allowed companies to protect and profit from their expertise.

Costs
Much of the technology that sparked gas boom got started years ago, but it wasn't until around 2009 when it really took off as a viable source of production. 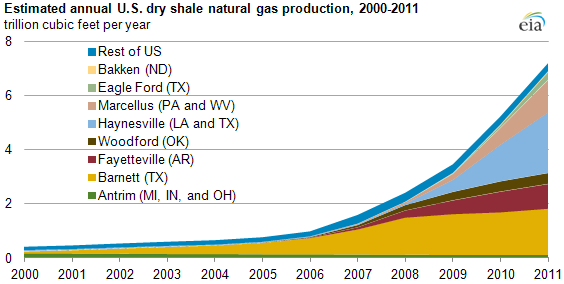 At that time, natural gas prices were high, and the cost for using new drilling technology was still economically feasible. Even though natural gas prices fell for the next couple of years, gas companies got very good at finding high-probability sites for wells and reducing well completion costs. From 2006 to 2012, gas specialist Ultra Petroleum (OTC:UPL) reduced drilling costs by 30%. Today, the average shale gas well costs somewhere in the range of $3 million to $4 million.

According to the EIA, China and Argentina have the world's largest and third largest shale reserves, respectively. In both of these countries it can cost as much as $12 million to drill a gas well. A large part of the higher costs for both of these countries is that their shale reserves are much deeper than those in the U.S. and so require longer drill times and more drilling fluid. Also, since their shale gas reserves haven't been as thoroughly assessed as those in the U.S., the probability of sinking a successful well is lower. So international oil companies are more hesitant to dump $12 million into a riskier play overseas when they can spend $3 million to $4 million on a lower-risk well in the United States.

Infrastructure
If there is one part of the U.S. energy boom that's been underappreciated, it's our massive pipeline infrastructure. 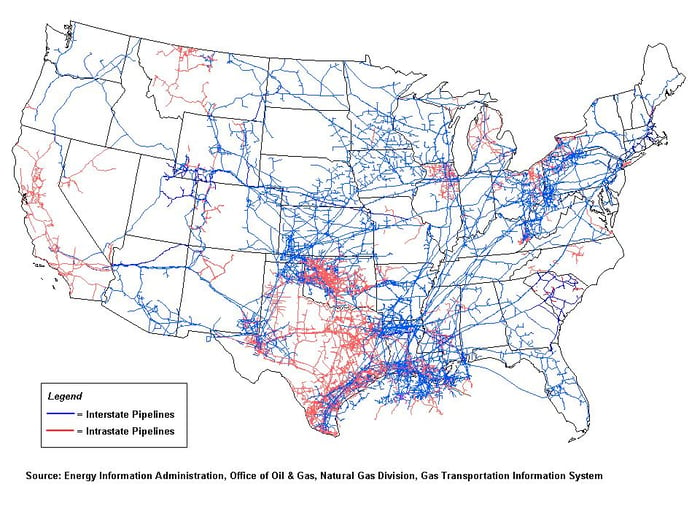 For the past few years, inadequate takeaway capacity has been one of the weak points of the natural gas industry. Several areas, such as the Marcellus, were unable to produce because of limits on available pipeline capacity. Yet when you compare America's natural gas pipeline with other countries, we are years ahead. To date, the U.S. has more than 300,000 miles of pipeline, and every year since 1999 we have added 5 billion cubic feet per day of takeaway capacity.

In contrast, China has less than 27,000 miles of gas pipeline and a very segmented system that's divided up between the national oil companies and local transmission companies. While the country has plans to almost double the size of its pipeline network by 2015, the entirety of this new system is sill less than Kinder Morgan's (NYSE:KMI) 62,000 miles of natural gas pipeline in North America alone.

The current pipeline system in China is built for 3.6 trillion cubic feet per year of production. China plans to produce almost double that number by 2020, so it will take a massive amount of infrastructure development to build an adequate gathering system.

What a Fool believes
The success of the U.S. energy renaissance has been due to a wide array of elements, and some of those elements have also put the U.S. ahead of the rest of the world in terms of shale gas production. This advantage won't hold forever, though, and several companies are looking to get in on the ground floor in some of these newer shale plays. Royal Dutch Shell plans to spend $1 billion a year to develop shale gas in China as part of a production sharing agreement with China National Petroleum, and 6% of Apache's (NASDAQ:APA) total petroleum production comes from shale deposits in Argentina.

Eventually, other countries will catch on, and perhaps the expertise we have developed in the States could be a valuable export. Until then, the U.S. will enjoy its decade head start.