Amazon.com (NASDAQ:AMZN) reported earnings last night and those glossing over the numbers may see a few positive signs. Gross margin was up to 26.6%, a nice 2.6% jump from a year ago, and earnings per share of $0.18 were double what analysts expected.

But a closer look at the numbers shows that margins aren't improving at all and Amazon is only digging a bigger hole on its income statement. It's become reliant on Amazon Prime to drive growth and it's giving away goodies that destroy any chance it has at making a significant profit.

The draw of Prime
Amazon's Prime service is supposed to be a mutually beneficial partnership between Amazon and customers. For consumers, it costs $79 a year to get two-day shipping and access to Amazon's growing catalog of instant streaming videos. From Amazon's perspective, this is meant to provide an incentive to use Amazon for more purchases and generate more income.

In reality, what we've seen over the past two years is that fulfillment costs and technology/content costs of providing Prime have grown faster than revenue, offsetting any benefits of Prime to Amazon.

Prime costs Amazon
It's true that gross margin increased 2.6% in the first quarter to 26.6% but this neglects to include very important costs. The commonly quoted number doesn't include costs associated with Prime like shipping and content, which are very real costs that are ongoing in nature.

If we include these two costs, which are both directly related to generating sales, we find that what I'll call the "real" gross margin actually fell 0.2% over the past year to 6.8%. Over the past two years this real margin has been relatively flat while advertised gross margin has risen steadily. 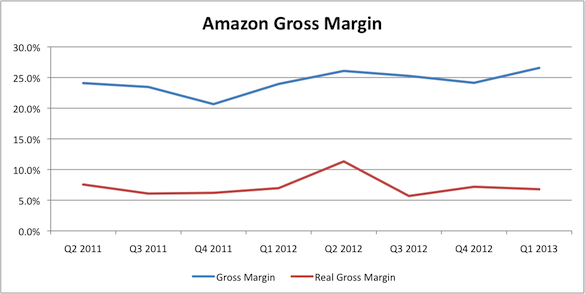 I don't see the trends changing anytime soon either. Sales grew 21.9% in the first quarter but fulfillment costs rose 38.7%, a trend we've seen over and over again. Technology and content costs were up 46% in the quarter and as we've seen at competitor Netflix (NASDAQ:NFLX), the margin pressure won't subside. Netflix just reported an anemic first-quarter profit because content costs are rising as it tries to grow its customer base. More customers mean higher content costs and these customers demand more content, which costs more. It's a never-ending profit killing cycle in streaming.

Amazon is arguably in a worse position than Netflix in streaming video because it has one revenue stream (Prime subscriptions) for two major costs (two-day shipping and streaming content).

Foolish bottom line
I'm one of only a few Fools who don't see the value in Amazon and it stems from the fact that the company doesn't seem to be interested in making money. The economics of the Prime service only highlight this problem, adding significant costs to the income statement and keeping real margins extremely low. Unless Amazon can grow margins after shipping and content costs, I think the stock is worth selling, or even shorting if you're crazy enough.