The slide in Apple's (NASDAQ:AAPL) stock price from more than $700 in September to less than $400 earlier this month was almost entirely brought on by fears that its growth was stalling out. Apple previously seemed to be rewriting the rules of the stock market as a high-growth large-cap stock. Apple's string of successful products (iPod, iPhone, and iPad) encouraged investors to expect its high growth rate to continue indefinitely. 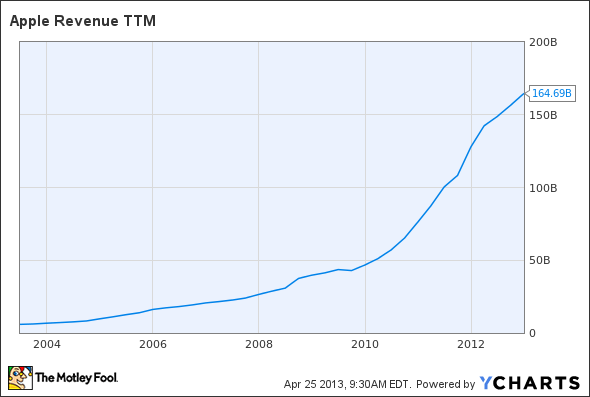 Since September, Apple has given growth investors a big dose of reality, as the growth trajectory has flattened out. While revenue was still growing in the first half of FY13, the growth rate was a modest 15% (that figure slightly understates Apple's growth because Apple's Q1 had an extra week last year). Moreover, Apple is not projecting any revenue growth for the current quarter.

Understandably, growth investors are now running away from Apple stock. However, that is not necessarily a bad thing, because Apple has reached the point where it is really a value stock more than a growth stock. CEO Tim Cook seems to have finally admitted that this is the case, and the new capital allocation plan announced this week solidifies Apple's "value stock" credentials. As Apple accumulates a base of value investors who are less concerned with short-term growth rates, I expect the stock to recover and continue providing strong shareholder returns.

The value shift
On Apple's conference call last Tuesday, Tim Cook stated, "[W]e acknowledge that our growth rate has slowed and our margins have decreased from the exceptionally high level we experienced in 2012." Apple's gross margin has returned to the high 30% range: much higher than competitors, but significantly lower than its 2012 level. Combining that with slower revenue growth, Apple reported its first year-over-year profit decline in a decade on Tuesday.

While some pundits like Jim Cramer have decried Apple's lack of growth, Apple management is clearly trying to change the conversation to value. By allocating an additional $50 billion to share buybacks between now and the end of 2015, Apple's leadership team made a clear statement that they believe the stock is undervalued. Buying back stock will reduce Apple's share count, entitling remaining shareholders to a larger piece of Apple's earnings.

Of course, this would not be much consolation if Apple's earnings continue to shrink. However, value stocks can still produce earnings growth; they're just not expected to grow at a double-digit rate for an extended period of time. For Apple, new product categories, new iPhone carrier partners, and a cheaper iPhone are all potential revenue growth drivers. These opportunities won't be able to return Apple to the 50% growth rates investors enjoyed in much of 2011 and 2012, but they should catalyze more modest earnings growth. Modest growth and a generous cash allocation strategy -- typical of value stocks -- could make Apple a great stock for long-term investors at its recent price around $410.

Meet another tech value stock
Cisco Systems (NASDAQ:CSCO) is another big tech company that had a bumpy transition from growth stock to value stock. However, it has rewarded investors well since the market changed its attitude about the company's growth profile. In early 2011, Cisco was still treated like a growth stock and officially projected a 12%-17% long-term revenue growth rate. However, Cisco's stock dropped significantly in the first half of 2011 because of investor concerns about the company's growth. CEO John Chambers stoked these concerns when he removed the long-term revenue guidance in May. 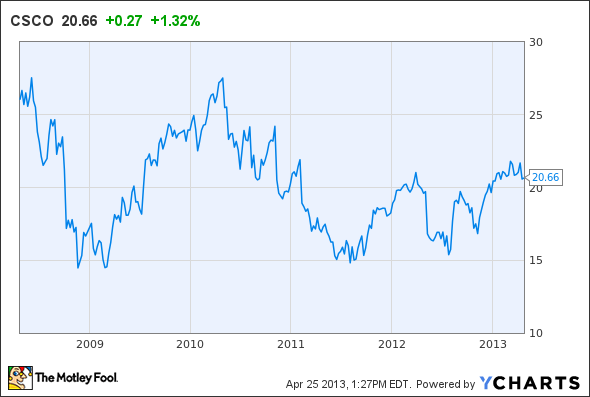 Finally, at Cisco's analyst day in September, Chambers announced a new -- and much lower -- revenue growth goal of 5%-7%, leading to annual earnings growth of 7%-9%. Despite these vastly lowered growth expectations, which have proved accurate so far, Cisco has rebounded by nearly 50% from its lows in the summer of 2011. Some of this can be attributed to the rising stock market, but it is also a result of moving from a growth investor base to a value investor base. Cisco has continued its long-standing share repurchase program, while instituting a dividend in 2011 at a yield just above 1% and growing the dividend aggressively; it now yields over 3%.

What does it mean?
So what does this all mean for Apple? Hopefully it means that most of the pain for shareholders is over. Cisco stock finally regained traction when management admitted that it had gone from being a growth story to a great value stock. Apple now has a dividend yield similar to Cisco's, and it now has a substantial share buyback program (also like Cisco). In short, Apple has embraced its new identity as a value stock. Moreover, Apple's near-term growth opportunities should allow it to grow revenue significantly faster than Cisco's 5%-7% clip. With Apple now pushing a solid case for value investors, I think shareholders will be very pleased about the stock's performance going forward.