It's no secret that investors were pretty disappointed with the earnings report from China's largest search engine, Baidu (NASDAQ:BIDU). Amid the earnings and revenue miss, however, I saw three things that long-term, buy-to-hold investors should be very encouraged by.

1. More businesses keep signing up
If you're unfamiliar with how search engines make the bulk of their money, it works like this:

By keeping an eye on how many businesses have signed up with Baidu, it becomes a little bit easier to get a feel for whether or not Chinese businesses are buying into this model. Based on the results, I'd say they are. 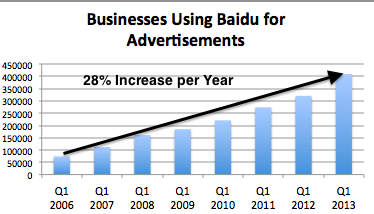 2. Investing where it counts
It can be somewhat disconcerting for investors to see their company increase revenue by 40%, but earnings per share only nudge up 9%. That's understandable, but it is the natural arc of evolution that search companies have had to take -- they are spending more money right now in order to solidify their position for the future.

Here's what Jennifer Li, Baidu's CFO had to say about spending: "We remain committed to investing aggressively, particularly in marketing and R&D. By deploying resources in the most strategically important areas of our business, we're confident we can build exceptional long-term value for shareholders."

That's short-term speak for "Listen, guys, we're sacrificing short-term gains for long-term dominance." That's important, as China's mobile and online advertising environment is similar to where the U.S. was a few years back.

Go back to 2011, when Larry Page retook the reins at Google (NASDAQ:GOOGL), the company was making similar remarks based on the need to expand capacity and to develop a strategy to monetize on mobile searches: "We expect that R&D expenses will increase ... as a percentage of revenues in ... future periods because we expect to continue to invest in building the necessary employee and systems infrastructures required to support the development of new, and improve existing, products and services."

Since then, Google has been able to increase both revenue and earnings at healthy rates, and investors have been rewarded with a 50% increase in the stock's price.

3. Worries about fraud
Never, at any point, has Baidu done anything to make me think that it has been guilty of fraud. But it's impossible to ignore the amazingly long list of Chinese companies that have been guilty of it.

Of Baidu's previous 15 earnings reports, the company had beat expectations 14 of those times. And of those 14 beats, seven had been by $0.02 or less. I'm not saying that that, in and of itself, is a sign of fraud. But earnings statements can easily be massaged to show Wall Street what it wants to see -- instead of accurately reflecting what's going on inside the business.

Now that Baidu has reported two straight earnings misses, I am -- paradoxically -- more comfortable with the stock in terms of the reliability of its reporting.

What to do now?
Though no one likes to see their company miss expectations or increase spending more than revenue, such concerns ignore the bigger picture. Baidu still has a huge share of the market in China, and with competition from Qihoo 360, the time is right to spend the money to solidify the future.

Qihoo simply doesn't have the money to keep up with Baidu without taking on lots of debt. And even if Qihoo wasn't around, it's smart to invest now. No one knows exactly where the current technological revolution will guide us, but using Google as a proxy, it's pretty clear that its earlier investments are paying off for shareholders.

For these reasons, Baidu is one of the three stocks I'm considering adding to my Roth IRA in May. Stay tuned to see if it's my pick.