Take a look around the pharmaceutical industry and you won't find many companies with market caps exceeding $100 billion (seven by my count). If you discount non-pharmaceutical businesses at Roche and Johnson & Johnson (NYSE:JNJ), then the largest pure-play pharma company in the world is Pfizer (NYSE:PFE). The giant weighs in at more than $200 billion -- nearly $30 billion larger than its next closest competitor -- and has been a stalwart of the industry for many decades.

Established pharmaceutical companies can be great core holdings for your portfolio; what they lack in growth they can make up for in hefty dividends. They don't offer risk-free investments, but their larger pipelines can often swallow late-stage failures. Still, investors may be left wondering if bigger really is better, especially after Pfizer trimmed its 2013 guidance. Let's take a quick look at several opportunities and risks facing Pfizer to see if the biggest pharma company in the world is the best investment.

Risks and hesitations
Pfizer faced a sharp fall over the patent cliff with Lipitor. The drug reached peak sales of $13.7 billion in 2006 -- the highest ever recorded -- but fell to under $4 billion in 2012 without exclusivity. In the first quarter this year, the fading star recorded sales of just $626 million. Annualize that to paint the dark and dreary picture facing the pharmaceutical giant.

Falling revenue and profits have placed added pressure on Pfizer in recent years. As the company scrambles to replace the world's most successful drug, it has been forced to sell its nutrition business to Nestle (link opens PDF) and spin off 20% of its animal health business. The quick shots in the arm may help to focus the company on its core pharmaceutical business, but any one-time monetary gains will fade over time.

Investors cannot say that Pfizer is not trying (see below). However, you could argue that Johnson & Johnson is having more success in the pharmaceutical space lately. The largest health care company in the world recently received approval for a type 2 diabetes drug Invokana, while pushing a promising immunology drug full steam ahead into two phase 3 trials. Sales of Stelara -- another immunology drug -- are poised to reach blockbuster status within the next several years with plans for several expanded indications in the wings.

Key opportunities
Pfizer has several exciting drugs in late-stage trials and several more on the cusp of market launches. Just last week, the company signed an agreement with Merck (NYSE:MRK) to develop and commercialize the type 2 diabetes drug ertugliflozin. The SGLT-2 inhibitor will dive into phase 3 trials later this year and should benefit from Merck's expertise in the diabetes market. Better yet, the class of type 2 diabetes drugs has not been shown to increase a patient's risk of pancreatitis like other therapies, such as Merck's Januvia.

Pfizer will turn its immediate focus to Xeljanz, a novel JAK3 inhibitor, as it awaits phase 3 data from ertugliflozin several years from now. The drug class has swept the pharmaceutical industry by storm. Novartis (NYSE:NVS) and Eli Lilly are developing JAK1 and JAK2 inhibitors for several applications with Incyte (NASDAQ:INCY), while a handful of other companies have molecules of their own. While companies have high hopes for the cancer-fighting potential of JAK inhibitors, such as Jakafi from Novartis and Incyte, the biggest opportunities may lie in the immunology market.

The good news for investors is that Pfizer is leading the pack. Xeljanz has quite a bright future despite a recent rejection in Europe. It is already approved for rheumatoid arthritis in the United States and is currently in two phase 3 trials for psoriasis and ulcerative colitis.

Another bright spot for Pfizer includes the anticlotting drug Eliquis, which was approved in late 2012 and will be marketed with Bristol-Myers Squibb. The drug, also in two additional phase 3 trials, is expected to fetch up to $5 billion in peak sales.

Foolish bottom line
There's no denying that Pfizer has outperformed its $100 billion peers in the past five years. 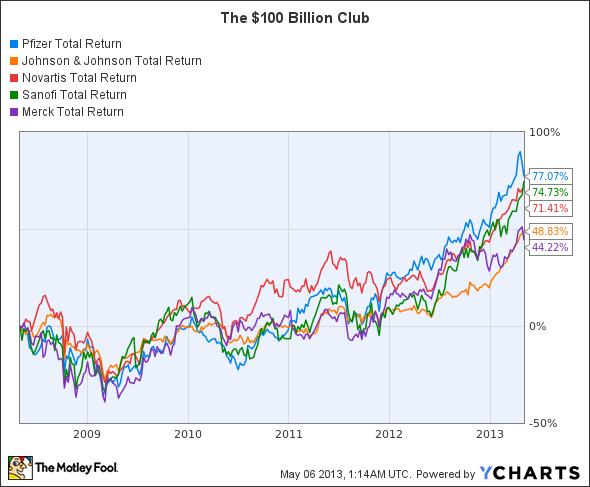 Can it continue? Fellow Fool David Williamson recently outlined why the lackluster first quarter didn't matter for investors, and I couldn't agree more. Pfizer's pipeline is full of big potential that could justify even higher valuations. I think a focus on pharmaceuticals will allow the company to continue to outperform the market in the next three years and am initiating a CAPScall to track my call.