So, if such a reading is not a surprise and is still less than the proposed goal, why does it matter?

Because the closer we come to that carbon limit, the more pressure will be placed on traditional energy companies and the greater the chance that regulation increases and that energy stocks are overvalued.

Carbon limits
Over the past 30 years, carbon dioxide has increased from around 330 parts per million to 400: 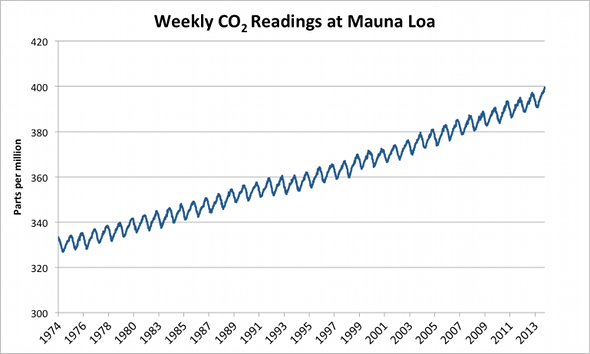 Regulation and stranded assets
In 2005, the European Union started the Emissions Trading System, which set up a cap and trade market for carbon dioxide and other greenhouse gas emissions. And while due to the European recession, the price per ton of carbon emissions fell from 25 euros in 2008 to around 2.50 euros in April, this type of regulation is spreading and will increase costs for all companies that emit pollution. Last November, California held its first auction of greenhouse gas credits at a price of a little more than $10 per ton, raising $290 million for the state, and the entire North American market is expected to reach a value of $2.5 billion this year.

In its "World Energy Outlook," the International Energy Association states, "No more than one-third of proven reserves of fossil fuels can be consumed prior to 2050 if the world is to achieve the 2 degree Celsius goal." So, in addition to pollution credit costs, energy companies' values could be harmed by the current overestimation of their proven and probable reserves if regulation reduces demand for fossil fuels and lowers prices. HSBC calculated just how such a scenario could affect the market value of several European energy companies:

With roughly half of these companies' current values at risk if demand and prices for fossil fuels fall, and a regulation push to make both of those conditions a reality, investors should remain cautious for the long-term future of these energy companies. While a transition to alternative energy will be slow, the realization of any overvaluation could be sudden, and as milestones like 400 parts per million of carbon dioxide are reached, the calls for further regulation will be louder.