As a longtime shareholder of OLED technologist Universal Display (NASDAQ:OLED), I'm sure I'm not alone in saying it has felt like an eternity since the first 55-inch OLED televisions were unveiled by Samsung and LG Display (NYSE:LPL) at the 2012 Consumer Electronics Show in Vegas.

Of course, both companies had already told the world what they had been working on, but to actually see the incredible aesthetics and picture quality of a large screen OLED television finally made it seem real.

Alas, while hopes ran high for commercial availability of OLED TVs in 2012, the year came and went with little additional movement on that front, thanks largely to difficulties in improving manufacturing yields enough to make mass production feasible.

Until recently, industry leader Samsung was stuck at a production yield of only 20% with its RGB evaporation technology, which is used to deposit the organic material in the top-emitting OLED structure. In fact, those difficulties were the reason LG Display decided to focus its efforts on apparently simpler methods involved with implementing white OLED evaporation technology.

Even worse, things started to get ugly as Samsung and LG began to duke it out in the courtrooms over technology leaks and patents.

As a result, while the indexes have steadily marched higher since the beginning of 2012, Universal Display shareholders were taken for quite a ride as Mr. Market continued to grow increasingly impatient: 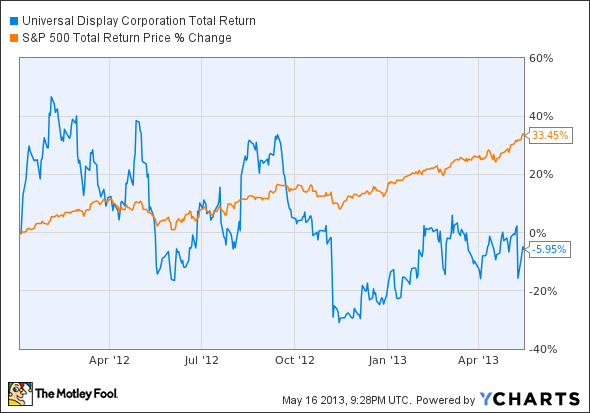 Thankfully, however, the Korean competitors finally made nice after their Japanese counterparts in Sony and Panasonic joined forces to create their very own 56-inch OLED televisions, both of which were unveiled at CES in early 2013.

No, really -- OLED TVs are coming soon
Now, according to a report from Korea-based ETNews, Samsung has managed to boost its own OLED production yields to an impressive 60%. Even better, the electronics stalwart also thinks it can raise those yields to 70% by the time it commercially releases its OLED TVs less than two months from now.

And yes, you read that right: While all the aforementioned companies will continue developing bigger and better production lines going forward, some of Samsung's first commercial OLED TVs are scheduled to jump out of the lab and into the fray on July 1, 2013.

Retailers gearing up
Brick-and-mortar retailers are also taking note, as they hope the new tech will be able to boost sluggish TV sales.

Best Buy's website, for one, now has an "OLED TVs" link under its TV & Home Theater section that states OLED televisions are "Coming This Year to Best Buy." At the same time, the page extols the superiority of OLED over LED and LCD TVs.

Heck, even Wal-Mart has an OLED television page on its website which explains some of the pros of the technology, including more realistic colors, deeper blacks, lower power usage, and much faster refresh rates. Of course, the folks at WalMart also astutely point out the first large screen sets will probably cost around $8,000, so it'll still be a while until the value proposition makes sense to the masses -- especially to those value-conscious shoppers who are currently enjoying record-low LCD prices.

Oh, the possibilities!
Then again, we also need to take into consideration OLED affords electronics makers the ability to build screens which are flexible and transparent, so down the road it could result in much more impressive tangible benefits in addition to just being a thinner, prettier alternative to LCDs.

In fact, both LG and Samsung have already shown off curved versions of their 55-inch OLED TVs, which they say better emulates a movie theater experience in your home. For around $13,500 for LG's version, though, I'm betting most folks will just take their word for it until the price comes down. With that in mind, however, I'm sure I'm not the only one who remembers the first 50-inch plasma televisions that showed up in my local Best Buy store for an eye-popping $15,000 a mere 11 years ago.

Is The World Finally Ready for the Next Big Thing in TVs? @themotleyfool #stocks $OLED $LPL $WMT $BBY $SNE $PCRFY Next Article
Current