Netflix (NASDAQ:NFLX) is really a very simple business in its streaming-focused incarnation. Spend money on content licenses and original shows, pay a minuscule amount of upkeep to keep the digital streams rolling, and cash in large profits as the as-yet-unmatched service attracts millions of new subscribers with very low marginal overhead costs.

The picture grows a tiny bit murkier when you factor in the costs of expanding the service to new international markets, but domestic streaming has become more profitable than the DVD-based cash cow. The long-term margin improvements from this strategy are juicy and undeniable.

But some industry watchers worry that Netflix is spending itself into a corner. The chief proponent of this theory is Wedbush Morgan analyst Michael Pachter, who takes every opportunity to call Netflix's model "unsustainable." The Street writer Rocco Pendola is another heavy critic, and Pendola just launched another attack on Netflix CEO Reed Hastings' "smoke and mirrors, dog and pony show."

In this diatribe, Pendola leans heavily on the assumption that Netflix is spending money faster than making it. Here's the keystone to the entire argument, quoted from an earlier Pendola article:

At first glance, it all makes sense. Netflix is borrowing money and not building up cash reserves. A classic scam, right? Pendola compares it to maxing out his credit card to pay utility and grocery bills.

But where did Netflix spend that 2011 cash infusion? That's a question Pendola doesn't seem interested in answering. Here, let me help: 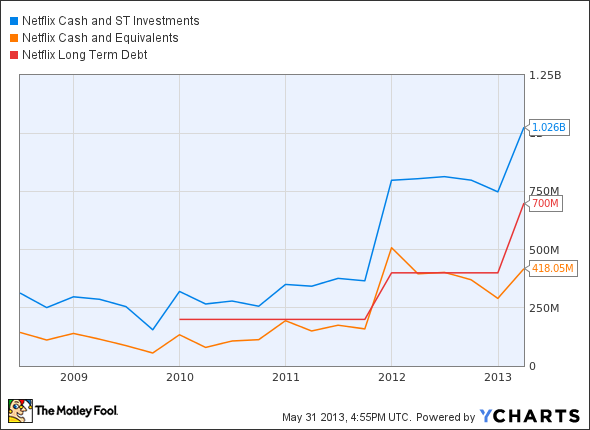 The "cash equivalents" that Pendola focused his wrath on don't include Netflix's short-term investments, which are securities not quite liquid enough to count as cash. It's a bundle of low-risk assets, mainly "corporate debt securities, government and agency securities and asset and mortgage-backed securities." Hardly cash burned on an open fire, nor pumped into risky content bets.

Taking all of this into account, that scary sequence of falling cash balances loses its sting. Compare and contrast:

I think it's pretty obvious from the stable net cash line that Netflix is being responsible with its cash reserves. Pendola missed a vital component of this calculation, which led him to believe that Hastings is basically tricking investors. If you make the same mistake, you might confuse a rock-solid and opportunistic business with an unstable mess, thus missing out on a tremendous investment.