Data analysis specialist Splunk's (NASDAQ:SPLK) first-quarter report was a bit of a head-scratcher.

Splunk shares took a 4% nosedive when the report was published, because its revenues came in strong but earnings were merely adequate. Revenue jumped 54% year over year to $57.2 million, easily topping Wall Street's $54 million target. The adjusted $0.06 loss per share was right in line with analyst expectations. That's just not good enough when your last three reports absolutely crushed Street targets on the bottom line, at least in percentage terms. The backlash was strong enough to suck data analysis rival TIBCO Software (NASDAQ:TIBX.DL) down into a 1.5% drop in early Friday trading. There must be something wrong with this supposedly robust market, right?

Well, wrong. After taking a moment to think about Splunk's results, investors came back for more. The stock ended up jumping as much as 4% higher on Friday, making for an 8% span between daily highs and lows. Splunk is now back to carving out fresh 52-week and all-time highs. And yes, TIBCO shrugged off the morning's downside action to trade right in line with market averages. For TIBCO investors, it's as if the Splunk report never happened.

And that's the right reaction. It's hard to complain about 54% sales growth as the company makes its way toward break-even and then profitable operations. The company knows how to deliver on the metrics that matter: 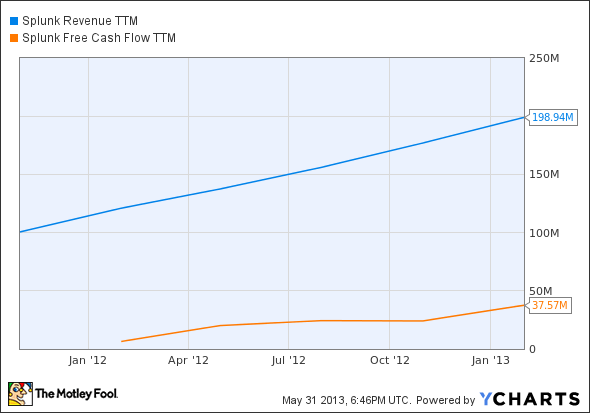 This quarter was a though slough for most enterprise IT specialists. Oracle (NYSE:ORCL) disappointed in its latest report, citing poor sales execution against a difficult macroeconomic backdrop. IBM (NYSE:IBM) followed suit, blaming its unusual miss on soft government orders and a "once-every-10-year event" in China. Both stocks plunged after reporting results, 8% in IBM's case and more than 10% for Oracle.

Splunk CEO David Conte acknowledged these headwinds but wasn't concerned about their effects on his own company. "The software sector, overall, I think had a challenging period and not so much for us," he said on the analyst call. The federal government has its inscrutable order patterns, but "overall, we saw strength across the board."

So Splunk is finding growth traction where even established IT giants like Big Blue and Oracle are failing. That's an impressive feat.

I expect TIBCO to report a similar worldview when its next quarterly update is due in about four weeks. As impressive as Splunk's growth trajectory is, TIBCO remains my pick in the data analysis market because of its more mature product portfolio and its industry-leading tools for reaching ultra-fast conclusions from unwieldy Big Data libraries.

That being said, there's a place for several successful vendors in this space, and Splunk certainly looks like an interesting bet. Splunk might be too richly valued and too hard to understand right now, but the ticker does belong on your Foolish watchlist for further analysis.