Bakken-focused exploration and production company, Kodiak Oil & Gas (NYSE: KOG) announced deal to acquire 42,000 additional acres in the Williston Basin of North Dakota. The deal will significantly boost the company's position in the Bakken, and will not only boost its drilling inventory, but will also increase its current production. Let's drill down into the deal and see what it means for investors.

Kodiak is paying $660 million to privately held Liberty Resources to add 42,000 net acres to the company's position in the Bakken, which will boost Kodiak's total position in the play to 196,000 net acres. That's a substantial increase as the deal boosts Kodiak's acreage by more than 30%. While Kodiak is still about a million acres behind top Bakken leaseholder Continental Resources (NYSE:CLR), the deal really does vault Kodiak's presence in the play. Even better, as you can see from the map below, these acres are close to Kodiak's current operations: 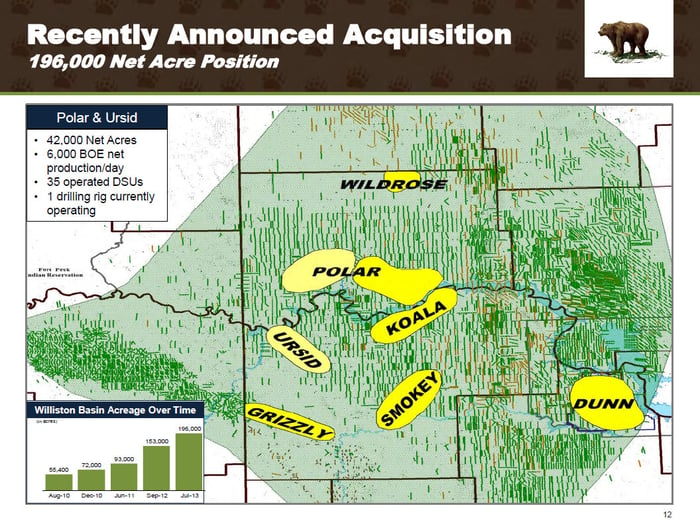 When looking at Kodiak, the story here is how quickly the company has boosted its production. While it's still well behind more developed peers like Whiting and Hess, those companies have much larger operations which span several production basins. That's given them the financial flexibility to reinvest capital produced elsewhere into the Bakken.

Therein lies a key risk for Kodiak, its putting all of its eggs in the Bakken basket. Its focus there has led to tremendous production growth over the past few years; however, the Bakken is still an emerging play and many worry about the rapid decline rates really holding back production growth. While it will be increasingly tougher for Kodiak to keep up its triple-digit-growth rates, the company is making all the right moves to keep growing with this latest deal as a prime example.