Up until now, most suggestions that "3-D printing" technology is the 21st century equivalent of Star Trek tech -- a reference to the famed television series' food-and-goods "replicator" device -- have been a bit exaggerated. You can't really walk up to a Stratasys (NASDAQ:SSYS) 3-D printer and ask it to make you a cup of "tea, Earl Grey, hot." Not yet, anyway.

But you've got to hand it to companies like Stratasys, and its archrival 3D Systems (NYSE:DDD), and their more famous rival MakerBot (featured on The Colbert Report) -- they're making progress. 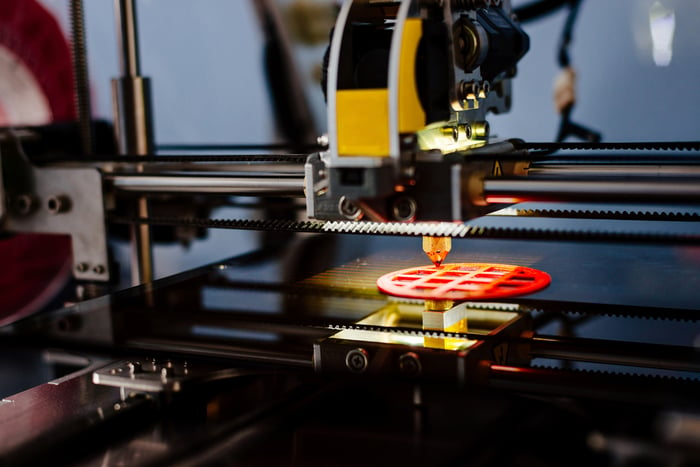 The most recent "one small step for 3-D tech" development happened just last week, when NASA announced a partnership with Mountain View, Calif.'s Made in Space to start actually making stuff in space, using 3-D printers.

Made in Space bills itself as a company that's "laying the foundation for using additive manufacturing technologies (also known as 3-D printing) to radically change the way we do space exploration today." It's partnered with both Stratasys and 3-D Systems, and MakerBot besides, to help figure out how 3-D printing will work in a weightless space environment.

Now, NASA is collaborating with Made in Space, too, on a project to get this plan off the ground. In the 3-D Printing in Zero G Experiment, Made in Space will provide 3-D printing equipment to NASA to try "printing" at first computer component boards, then bulkier items such as machine parts, tools, and science equipment, on board the International Space Station -- perhaps as soon as next year.

Small steps lead to giant leaps
As I said, this is just the start. Farther down the line, NASA envisions using 3D printers to:

In the most Trek-like scheme of all, NASA says 3-D printers may one day be used to print and recycle tools as they are needed, on board spacecraft making long-distance voyages. So, for example, if astronauts know they will need both a hammer and a screwdriver on a trip, they might print the hammer first, and then recycle its materials and print them back out again in the form of a screwdriver.

What's it mean to you?
So if you're an investor in one of the three decent-sized 3-D printing companies currently being traded publicly -- that's Stratasys, 3D Systems, and also ExOne (NASDAQ:XONE), because MakerBot is private -- what does NASA's latest test project mean to you?

First and foremost, the potential for growth in 3-D printing is bigger than many people may have realized. As of last week, it's officially "out of this world."

Second, the valuations on these companies similarly boggle the mind. Is 3D Systems really worth more than 100 times earnings? Could unprofitable Stratasys and ExOne actually deserve their price-to-earnings ratios of infinity? It really depends on the growth rates (of which Stratasys, at 30% annually for the next five years projected, currently has the highest).

Third and finally, if you don't like the valuations on these three publicly traded 3D printing companies right now, then wait five minutes. As headline-grabbing news of previously unheard-of "Made in Space's" NASA contract shows, new companies are emerging like gold coins slipping out from beneath the couch cushions.

Give this industry some time, and there will be opportunities aplenty to invest in this industry at reasonable prices. Let's "make it so."