Sorry, folks. Although Tesla and SolarCity have roared in 2013, Elon Musk has no plans to take SpaceX to the public markets. There are plenty of reasons it doesn't really make sense to go public, anyway. The company has a time horizon well beyond the quarterly measuring stick carried by most financial analysts. Launch delayed? There goes the quarter! Besides, can you imagine the panic behind the closed doors on Wall Street created by trying to model the financial ramifications of a multi-year visit to Mars or the construction of a space colony? How hopeless and hilarious that would be!

Of course, Musk is well aware of these market forces:

No near term plans to IPO @SpaceX. Only possible in very long term when Mars Colonial Transporter is flying regularly.

Investors hoping to buy stock in SpaceX will have to wait, but there are several other companies developing launch vehicles, orbitals, and crew capsules that you can own today. 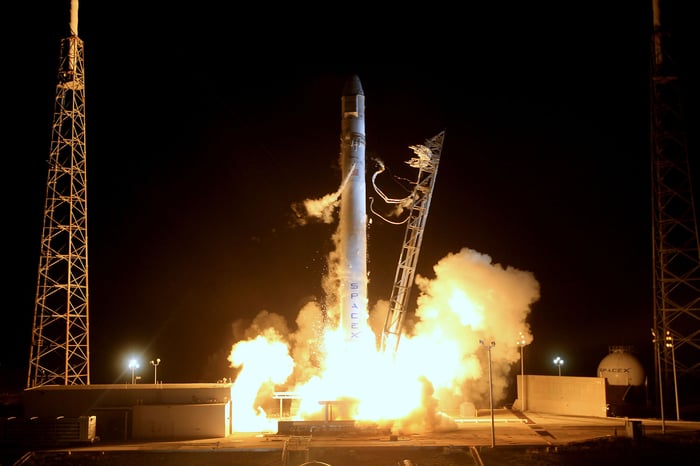 Orbital Sciences launches its first supply mission to the International Space Station, or ISS, later this week. The company's Antares rocket had a successful demonstration launch earlier this year and will now haul eight Cygnus capsules carrying a total of 20,000 kilograms of cargo to the ISS between 2013 and 2016. There are some big differences between this capsule and Dragon from SpaceX. Cygnus will not be reusable and will not carry a crew. Instead, the larger capsule will focus on unmanned resupply missions. It will be stuffed full of trash from the ISS and thrown back at Earth where it will burn-up upon reentry.

Lockheed Martin's Orion may not be flying its first manned mission until 2017, but don't discount the space capsule just by looking at the calendar. NASA has high hopes for Orion becoming one of the go-to spacecrafts for transporting humans back to the moon, to asteroids passing by Earth, and eventually to Mars. It remains the largest current project developing a potential interplanetary spacecraft with subcontractors such as Alliant and Honeywell involved in key steps in the process.

Alliant is also developing its own independent Liberty space capsule, which is being developed solely on private funding. The company already has the rocket know-how to get to space: It constructed the solid rocket boosters for NASA's space shuttle fleet. Since there aren't many firms with expertise in placing objects into orbit, subcontractors include familiar faces such as Lockheed Martin and Honeywell (get used to that).

Last but not least, Boeing is quickly developing the CST-100 for flights to the ISS and eventually beyond. The capsule will hold up to seven crew members and will be reusable for up to 10 missions. The company is not creating a novel rocket system for the new craft; instead, it is looking to piggyback on existing infrastructure, including the Falcon 9 from SpaceX. That will enable the company to expedite development, although it will need to contract launch services to partners.

Foolish bottom line
Investors looking to invest in a pure-play space company are currently limited to Orbital Sciences. It could certainly become a leader in resupply missions, especially given its slightly larger capsule volume compared to Dragon and NASA's desire to diversify, but it does not offer the wow-factor of commercial crew transport. That leaves Boeing, Lockheed Martin, and Alliant -- all of whom have decades-old relationships with NASA. Each sees the potential of enabling the multibillion-dollar industries of the future and will surely be rewarded over the long term. Just remember that these projects -- and their distant offshoots -- will be decades in the making.