Few stocks on the market have had the kind of decade Disney (NYSE:DIS) stock has had. The stock is up 254% when you include dividends, and the company has spent billions on adding content to solidify its position as an industry leader. 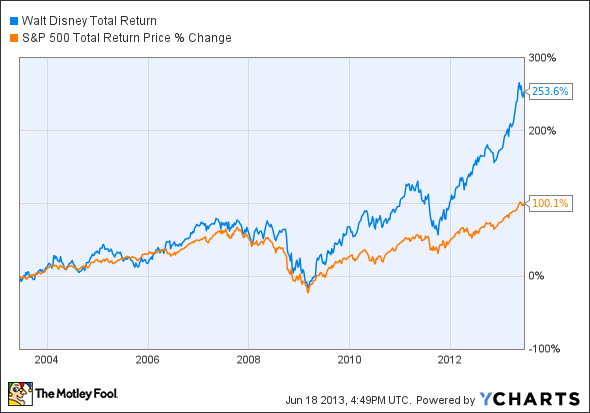 But with Disney stock now trading at 20 times trailing earnings and yielding just a 1.2% dividend, can its strong run continue? I think there are three reasons it can.

Content is king
Since Bob Iger took over as CEO, he has pulled Pixar, Marvel, and Lucasfilm into the fold, showing a commitment to content. This is important right now because content is king. We're moving to a streaming business model from distribution models like cable, the box office, and DVDs and the companies who own content hold all of the leverage going forward.

Some recent signings show just how lucrative the content business can be. Netflix (NASDAQ:NFLX) is reportedly paying $300 million per year for early release films from Disney and a new deal with Amazon.com's (NASDAQ:AMZN) LOVEFiLM service will bring older films and original shows to the service. Netflix and Amazon are fighting each other for content and Disney is in a position to play the companies off each other and make more money in the process.

The difference between content owners and content distributors is stark and you can see it in financial results. Below is a chart of net income for the last three years of content owners Disney, Time Warner, and Viacom compared to two of the biggest streaming distributors, Netflix and Amazon. Which side of the business would you want to own? 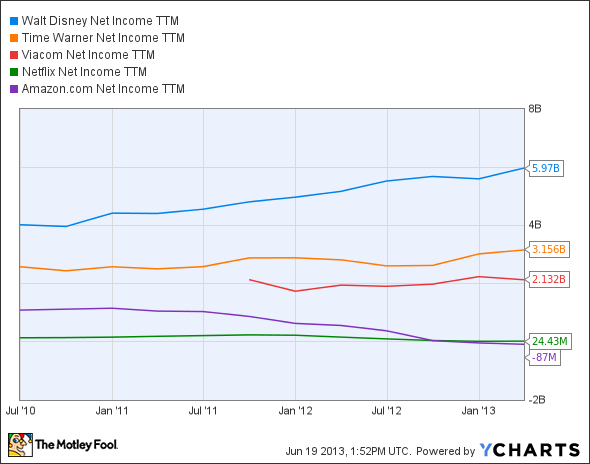 Disney's incredible content on the big screen is a driver of the company, but that's before including the potential for Disney to develop its own streaming networks or a plethora of options for its best asset: ESPN.

ESPN is the king of sports media
The media networks business is the largest at Disney and cable networks, especially ESPN, drive it. In the first quarter, cable network revenue grew 9% to $3.5 billion and operating income was up 15% to $1.7 billion, an incredible 50% operating margin.

ESPN hasn't created an impenetrable competitive moat, but its sheer size allows it to purchase high-value content that few other sports networks can afford. But here's what we really need to know as investors: There's no other channel that would start a riot faster if cable companies dropped it.

Theme parks are Disney's key point of leverage
The content Iger has amassed in the last few years would be far less valuable if it weren't for Disney's parks and resorts. Pixar, Star Wars, and Marvel movies will drive the next phase of developments at resorts and the characters have begun roaming the ground with Mickey and Minnie Mouse.

What most people don't know is that parks and resorts are Disney's second-biggest business and its fastest-growing segment. Revenue was up 14% in the first quarter to $3.3 billion and operating income jumped 73% to $383 million.

There are two big drivers of growth from a macro perspective and they are a growing middle class in Asia and disposable income for high earners in the U.S. Growing attendance at Hong Kong Disneyland Resort was cited as a driver of growth last quarter and that will continue as the Asian market is saturated with all things Disney. But it was actually domestic operations that drove growth in the first quarter and that's because those with disposable income are traveling again and visiting Disney's resorts.

Disney stock is ready for the future
It's hard to argue that Disney stock is cheap at 20 times earning, but sometimes you have to pay up for a great company. The media business will go through a lot of changes over the next decade. I think, however, that Disney is well positioned for that with the best assets in media from the box office to the small screen.