A double-digit drop for Amgen (NASDAQ:AMGN) stock over the past couple of months has likely left a bad taste in the mouths of shareholders. Is this venerable biotech ready to mount a comeback?

Behind the drop
After racking up year-to-date gains of 27% by late April, shares began a two-month slide. What caused this fall? 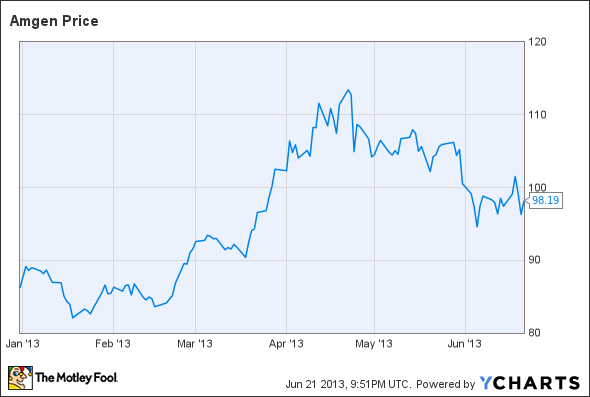 The drop-off originated from Amgen's first quarter revenue miss. Although the company beat expectations on earnings, it reported revenue of $4.2 billion -- less than the average analysts' estimate of $4.37 billion.

Despite the revenue miss, Amgen provided solid full-year earnings guidance. The company has also announced some positive clinical study results in the meantime.

Easy as A-B-C?
While the initial drop stemmed from first-quarter results, some of the fall in Amgen stock is due to additional factors. Other big biotechs dropped during part of the same time frame from general market pressures. Take a look at the "ABCs" of big biotech -- Amgen, Biogen Idec (NASDAQ:BIIB), and Celgene (NASDAQ:CELG). 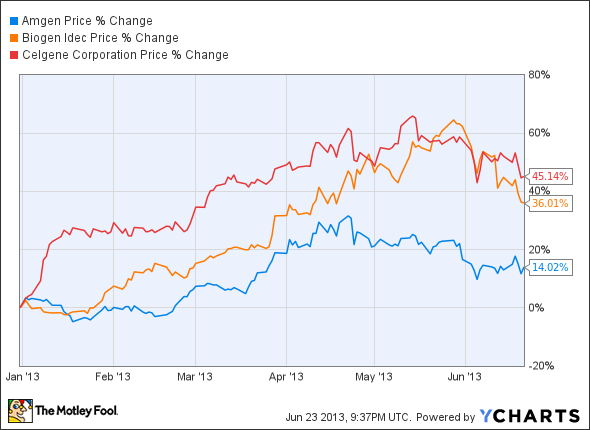 Biogen fell 17% from its high mark in late May. Celgene stock has dropped 12.5% since mid-May. At least Amgen is in good company with its 13% drop. A case could be made that all of these biotech stocks make attractive investment possibilities.

Of course, Amgen's product lineup holds more question marks than the other two big biotechs. Teva Pharmaceuticals (NYSE:TEVA) begins selling a biosimilar version of Neulasta in the U.S. beginning in November. While Amgen's sales for its Neulasta/Neupogen franchise have held steady even with Teva's European biosimilar already on the market, that revenue could begin dropping soon.

Foolish take
I thought that Amgen was a pretty good buy after its pullback following the first-quarter earnings announcement. With the further drop in price, Amgen stock is an even better buy now, in my view.

Yes, there are challenges ahead with the competition from Teva's biosimilar. However, Amgen will soon make even more profit off of Enbrel after Pfizer relinquishes its royalties for North American sales. Xgeva/Prolia sales continue to grow strongly. The company also has some drugs in late-stage clinical studies that have the potential to do well. Is now a great time to buy Amgen stock? I think so.