Over the seven days running from June 20 to June 27, mortgage analysts at Freddie Mac clocked 30-year mortgages running up 53 basis points, from 3.93% to 4.46%. That's a 13.5% increase, for anyone who's counting. As one commenter on our site complained: "I am buying a house in San Diego and my doofus mortgage broker did not lock my rate as advertised 6/11/2013. We are 3 weeks into escrow and [our mortgage will cost] $200 per month higher than 2 weeks ago!"

Over the course of a year, if rates keep rising so quickly, it could work out to an eightfold increase. One year from today, homebuyers would be paying upwards of 31% to own a piece of the American dream.

First, it's generally a bad idea to extrapolate one week's news into what might happen a full year from now. Ben Bernanke doesn't hold press conferences every week of the year, after all. It's unlikely that last week's panicked price-move will repeat, and almost a dead certainty it won't repeat ... repeatedly.

Second, if you think mortgages cost a lot today, well ... they do. At least as compared with what they cost a week ago. But a bit of perspective is in order. Check out how today's "expensive" mortgages compare with what people paid for similar mortgages over the past 10 years: 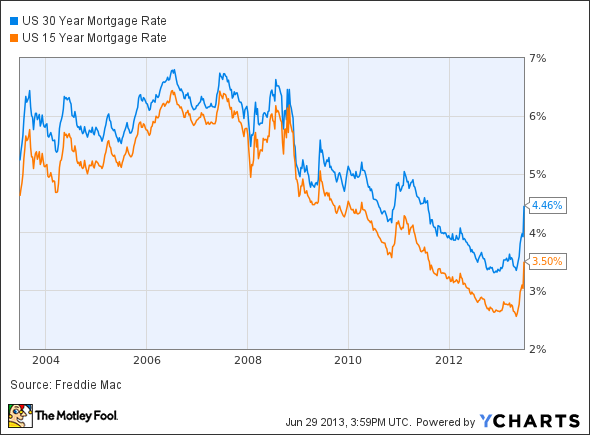 As you can see, mortgages now cost roughly what they cost two summers ago. That's two years of rate-cuts that have vanished, true. But you're still paying only about 4.5% for a traditional 30-year fixed-rate mortgage, or FRM, today. That's about a 30% discount off the prices people had to pay back in the middle of the Housing Bubble of the mid-2000s.

Fifteen-year FRMs are even cheaper. At 3.5% on average, they cost close to 40% less than their Bubble era prices. And costing nearly a full percentage point less than a 30-year FRM, they're about as big a bargain (relative to the 30-year cost) as we've ever seen, historically.

Sound good? It gets better. Pull back a step, and let's expand our view and see what rates looked like over a longer period of history: 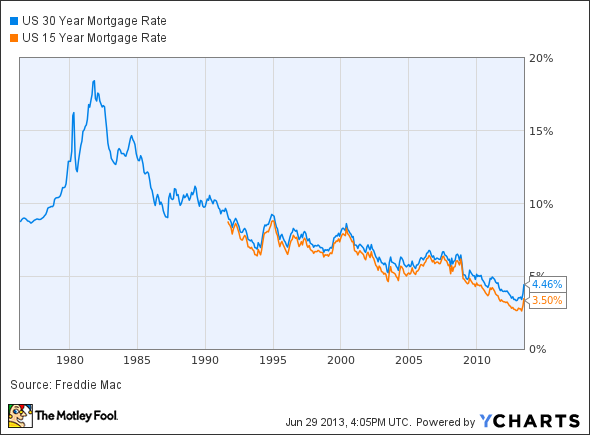 So what you see here is that as recently as the mid-'80s -- just one 30-year-mortgage ago -- people were paying literally four times what they're paying for a 30-year FRM today.

Foolish takeaway
So what does this mean to you? Well, if you're in the market to buy a new home, or have been sitting on the fence, waiting to refinance a high(er)-cost mortgage, it means there's still no time like the present to get started.

Mortgage rates remain historically cheap, and sitting on your hands in hopes that rates get even cheaper probably isn't prudent. The Fed's itching to call a halt to its bond-buying program, and this suggests mortgage rates will keep going up -- hopefully not as sharply as last week, but still up. It behooves you to get while the getting is still good -- and while you're at it, look long and hard at taking out a 15-year FRM rather than a 30. That nearly 1% difference in rates looks awfully enticing.

Make that takeaway(s)
Meanwhile, for investors, there's a second takeaway here. Check out this table of quoted rates on U.S. government Treasury bill prices, published by the Fed on June 24:

It shows that over the course of just five trading days, the popular 10-year Treasury bond jumped 15% in yield -- rising right in line with the 15% jump in 15-year FRMs, and faster than the 13.5% spike in 30-year FRMs. If this trend continues, it could put the hurt on residential mortgage lenders such as JPMorgan Chase (NYSE:JPM), Wells Fargo (NYSE:WFC), and Bank of America (NYSE:BAC). They may find the cost of getting money to lend from the Fed, rises faster than their ability to charge more for the money they lend as mortgages.

In fact. I can pretty much guarantee this is the case for one of these bankers. Just last month, Chase bought the rights to service my mortgage, and quickly sent me an offer to reduce my rate from 4.75% to 4.25% -- no charge. Had I taken them up on that offer, Chase would already, today, be underwater on my mortgage, and out of pocket the closing costs to boot.

That's bad news for JPMorgan, which has more than $123 billion in residential mortgage loans on its books. For Bank of America ($253 billion) and Wells Fargo ($325 billion), it could be even worse.

Did You Miss Your Chance to Grab a Cheap Mortgage? @themotleyfool #stocks $WFC $BAC $JPM Next Article
Current