While most investors were thinking about what was going to be served at the family Fourth of July picnic, EXCO Resources (NYSE: XCO) was out shopping. The oil and gas company came away with a big haul, as it picked up $1 billion worth of assets from Chesapeake Energy (OTC:CHKA.Q). While many investors have looked at the deal from the Chesapeake Energy side, I'm curious as to what's in it for EXCO.

When you look at it from the EXCO side of things, two main themes come to the forefront. First, the deal diversifies EXCO's asset base by adding a strategic entry into the oil-rich Eagle Ford shale. Secondly, the acquisition fortifies EXCO's position in its core Haynesville operations. When you add it all up, it's a pretty solid acquisition for the company. 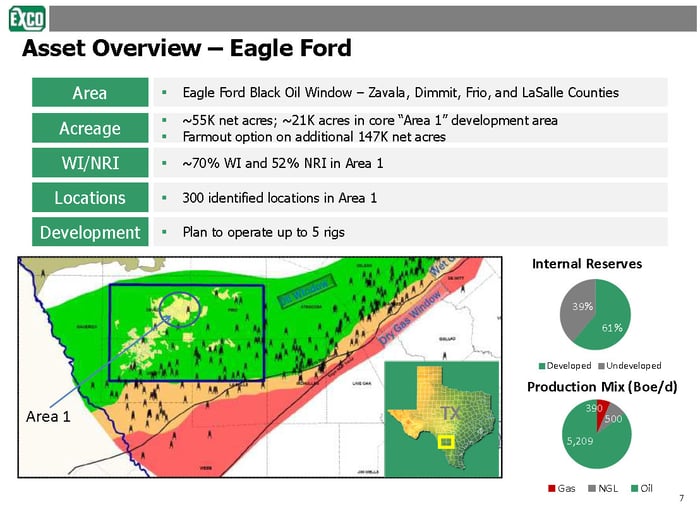 The second part of the deal brings Chesapeake's interest in two Haynesville Shale packages, which EXCO is picking up for $320 million. It includes non-operated interests in 170 EXCO-operated wells, as well as operated interests in 11 Chesapeake sections adjacent to EXCO's core operations. The key to this part of the deal is that it strengthening and lengthening EXCO's core area:

What investors need to see here is that this is a pretty good deal for both companies. While Chesapeake is giving up oily Eagle Ford acres, these are not its highest return core acres. As investors know, Chesapeake really needs to shore up its balance sheet, and it's turned to asset sales to make that happen. Already this year it's signed a billion-dollar joint venture for some of its acres in the Mississippian Lime, as well as smaller deals in the Marcellus with EQT (NYSE:EQT) and Southwest Energy (NYSE:SWN).

All totaled, these deals have brought about $3.6 billion to Chesapeake's coffers, which will enable the company to fully fund its capital budget this year. It's done so by selling assets, which, while non-core to Chesapeake, were extensions of core assets to the buyers. For example, in the asset sales to EQT and Southwest, Chesapeake sold acreage that was a much better strategic fit for those buyers than for Chesapeake, so it made sense to part with those assets. Likewise, the Haynesville asset is a perfect fit for EXCO.

That being said, the Eagle Ford assets are a real coup for EXCO. While not being core totally for Chesapeake, these are high-margin, and therefore high-return, assets. However, with a 10-year drilling inventory of more than 3,500 wells, Chesapeake could spare to monetize these assets to have the capital it needs to drill those future wells. So, while the optimal solution would have been for Chesapeake's operations to be able to fund its drilling program, the company is trying to make the best of its situation without giving away its most prized assets.

EXCO was lucky enough to be in the position to take advantage of that situation to both strengthen and extend its operations. It was able to pick up exceptional cash flow assets, at a reasonable price. That, in my opinion, makes EXCO a clear winner in this deal, as it looks like the company spent its billion dollars wisely.