Second-quarter earnings for our favorite pipeline companies kicked off with Kinder Morgan (NYSE:KMI) and Kinder Morgan Energy Partners (NYSE: KMP) reporting yesterday after the market close. Revenue for KMP popped more than $1 billion year over year, to $3.02 billion. The growth came largely at the hands of the partnership's two most recent acquisitions, but there is plenty more for investors to consider beyond that, so let's break down the earnings of the individual segments.

Segment review
For a partnership of its size, Kinder Morgan remains fairly diverse. This is how its earnings look on a per-segment basis, before debt, depreciation, and amortization. 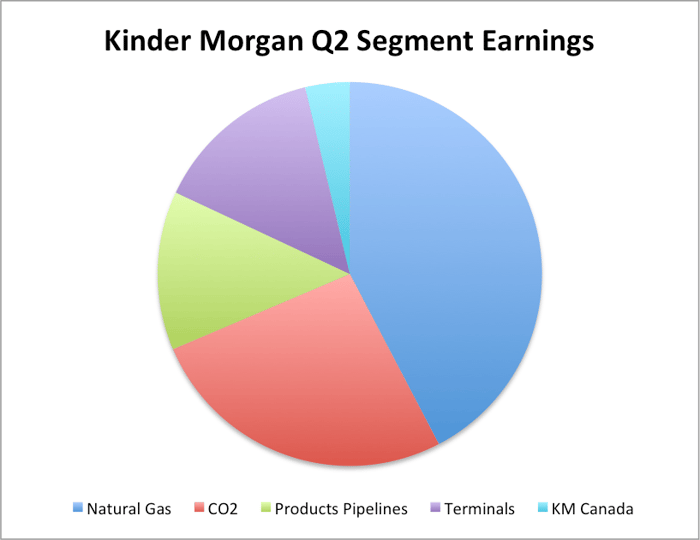 With the exception of that small slice that is Kinder Morgan Canada, every segment is outperforming its year-ago results. Now, let's take a closer look at each business.

Clearly, the partnership's two most recent acquisitions are really making an impact, especially in the natural gas segment. However, the Kinder Morgan's diversity remains its core strength.

Foolish takeaway
The strong quarterly performance means that Kinder Morgan is able to remain on track with its dividend and distribution growth. Both KMI and KMP increased their quarterly payout to $0.40 and $1.32, respectively. Both entities are expected to hit their annualized targets of $1.60 and $5.33 per unit.