Sometimes it seems like investors have a language all their own. If you ever tune in to the talking heads on some of the major business stations, they'll use some big words that likely will have you scratching your head. One such word is contango, which has absolutely nothing to do with dancing.

Contango is a term used when a trader is talking about a forward or futures contract. Normally, a forward or futures curve will have an upward slope to it meaning that traders are willing to pay more for the underlying commodity or contract in the future. The market is said to be in contango when traders are willing to pay more today than they are in the future. The following graph helps to display this more visually: 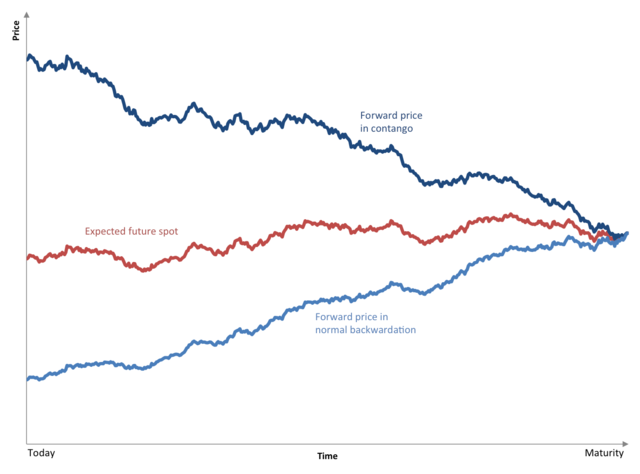 This term can come into play when investing in the energy markets. When natural gas or oil is in contango, a producer might want to lock in the price of oil and gas to get a better short-term price to ensure its profits. That's because if a market is in contango it means that the company can earn more money by selling short-term contracts as opposed to a longer-term contract. Let's take a look at a couple of examples of how this can play out with your investments.

Let's say Chesapeake was nervous about the price of gas for the rest of the year and it wanted to hedge the other 22% of its volumes. If the market is in contango, Chesapeake would realize greater value by hedging for a shorter duration because the shorter duration contract would be worth more than a longer duration contract. However, hedging works both ways -- the company could lock in the price only to see prices spike higher, and therefore it would miss the upside. Then again, prices could plunge, meaning that the shorter contract won't help in future quarters.

Contango can also affect a company like LINN Energy (OTC:LINEQ) which seeks to hedge all of its production for the long term. A good example of this can be seen last year when LINN Energy bought the Jonah Field from BP (NYSE:BP). Upon closing the deal, LINN hedged 100% of the expected oil and natural gas production through 2017. If the market were in contango at the time it could have had an impact on the future profits LINN expects to produce from that asset. It would mean that production sold just after closing would have netted a higher sale price than oil and gas that won't be produced until 2017. That's one reason why LINN had been using puts to hedge its production; it wanted to keep some of that upside.

In fact, this is one of the issues Leon Cooperman recently pointed out when addressing those analysts and investors that are negative on LINN. In a letter to the editor of Barron's, Cooperman stated that the paper had written:

The capital Linn formerly committed to commodity options was spent "largely [on] in-the-money puts on natural gas." This is wrong. Bary is conflating the spot price of gas with the forward curve, which has long been in contango [the futures are trading above the spot price]. He writes that "this has allowed the company to get more than $5...for its gas when the market price has been $4 or lower." He is twisting facts to suggest that there is something untoward about hedging gas five years out at a premium to spot prices.

Contango can really affect a company's ability to hedge its production, which is one reason why BP isn't an active hedger, because the company has been burned in the past. Its belief is that investors own its stock in order to benefit from the rise in commodity prices, but the company is continually reappraising its strategy to hedge its natural gas exposure. While a market in contango can lock in solid earnings this year, a reversion to the mean will make it tough to keep the pace.

Hedging is an important tool for oil and gas companies. Some, like LINN, are committed to hedging production for years in advance to lock in cash flow. Meanwhile, global giants like BP stay away from hedging because of the role contango can play in the market. As an investor, it's important to know what your company's stance is on hedging the commodities it produces because the market's current condition can have a real effect on earnings.