It has been very easy to pounce on the coal industry lately. Not only is it under pressure because of natural gas and environmental concerns but the price of coal has made it very difficult to make a profit. Not everyone sees it that way, though, and Peabody Energy (OTC:BTU) is one company that sees very bright times ahead. Let's take a look at three signs the company sees that could mean good things for the industry, and Peabody specifically, going forward.

Demand set to surge
From 2011 into much of 2012, coal ceded a large part of its market share to natural gas because of the huge drop in natural gas prices. Since then, coal has slowly regained a more dominant position. 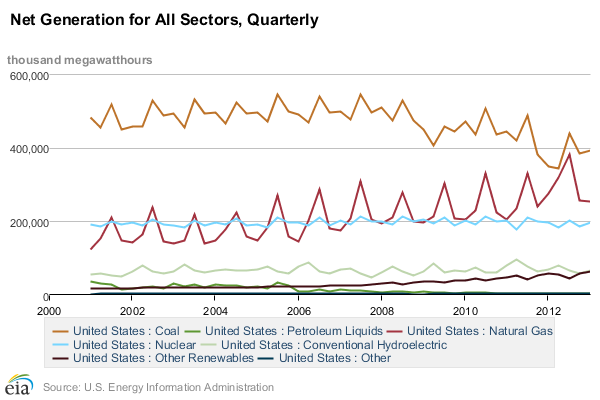 What is most intriguing about this trend, though, is that not many coal companies have seen much of an uptick in domestic demand during that time. Despite an 11% increase in coal generation this year, overall industry shipments are down 5%. The reason that this is happening is that several utility companies are burning through their coal inventories rather than buying new.

Today, inventories for Powder River Basin at utility plants are 25% below what they were this time last year. According to Peabody, this trend is likely to continue for another month or so, but over the long term, inventories will need to be replenished.

But the U.S. is just the appetizer. The actual meal is the impending upswing for the global market. In 2013 alone, another 75,000 megawatts of coal-fired generation capacity is expected to come online. That is the equivalent of the U.S. expanding its entire coal-generation fleet by almost 20%. To put a cherry on top of it, Chinese and Indian coal imports are expected to grow by 15% this year alone.

The green light for China
Perhaps you could lump this in with the rest of the demand side of things, but what's happening in China merits its own brief discussion. There are two main concerns in the coal market for China: pollution control and safety. In 2012, there were more than 1,300 deaths related to mine accidents, nearly 50 times the accident-related deaths in the U.S. Because of this, the Chinese government expects to close more than 5,000 coal mines this year. Combined with depressed coal prices, these two elements are expected to shut 45% of all production in the Shanxi province, the largest concentration of coal in China.

Another element to consider is the government's concern for environmental quality. There have been whispers that the country may ban the import of what is considered low-quality coal, which is coal with a low BTU rating and a high ash content. The region that could be hurt the most is Indonesia, which has a much higher ash content for its lower-quality coals. In order for China to make up for both the curbed domestic production and restrictions on Indonesian coal, it will need to rely on higher-quality coals from the U.S. and Australia. This plays brilliantly into Peabody's hands as they are well positioned in both markets.

Supply crunch
One of the reasons that Peabody was able to generate better-than-expected earnings this past quarter was because of its ability to bring down costs. The highlight of these measures was a 20% reduction in the cost of making pulverized coal at its Australian operations. Whether or not the rest of the industry can replicate these levels of cost savings is yet to be seen, but according to Peabody CEO Greg Boyce, the current price levels are unsustainable: "[We] continue to expect U.S. markets to improve as stockpiles normalize and noncompetitive production is removed from the system."

Right now, there are several Australian assets up for grabs because mining giants Rio Tinto (NYSE:RIO) and BHP Billiton (NYSE:BHP) are both looking to shed their coal assets. This could be an opportune time for a company like Peabody to strengthen its international presence or a competitor like Alpha Natural Resources to trade up from its Central Appalachian assets and expand outside the U.S.

What a Fool believes
There are several opportunities for coal companies out there, but it's becoming more apparent that coal companies will need to pick their spots. It appears, though, that Peabody has selected well and could be well positioned if all these signs were to lead to a surge in coal.