American Electric Power (NASDAQ:AEP) reported earnings last week, the first of the big utilities (read "dividend stocks") to run its Q2 numbers. While AEP missed slightly on both top- and bottom=line expectations, there's more to this dividend stock's story that you need to know. Let's take a look.

Number crunching
For Q2 2013, American Electric reported revenue of $3.58 billion, just shy of analysts' $3.64 billion estimate. Sales have remained relatively steady over the past couple of years, despite a more erratic bottom line. 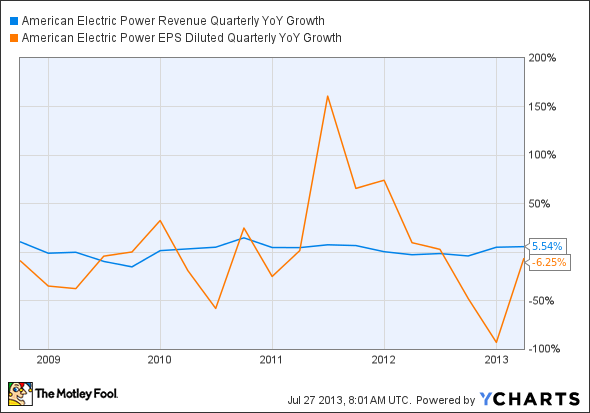 For this quarter, adjusted EPS clocked in at $0.73, underwhelming analyst expectations by a penny. Neither top-line nor bottom-line metrics were much off the mark, and Mr. Market seems to have thought better of its day-of stock-price punishment. By Friday afternoon, shares were back up beyond its July 25 earnings report price. 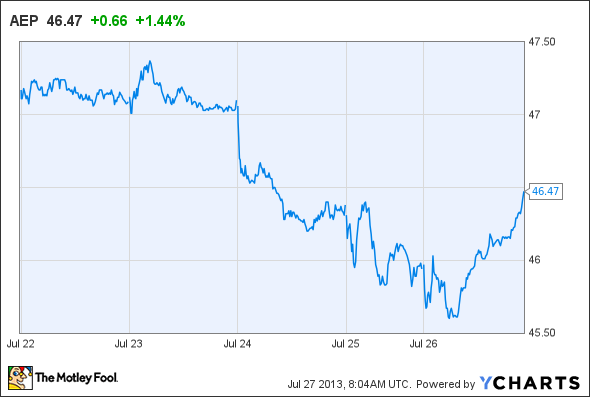 Beyond the numbers
Perhaps taking advantage of a quantitatively steady earnings report, CEO Nick Akins focused investors' attention more on AEP's future than on its recent past.

First up: coal. While coal has historically offered cheap energy, recent environmental regulations and cheaper natural gas have pushed many coal-centric utilities to back off the solid black gold.

AEP is no exception and is making headway to reduce its coal consumption. In his earnings call, Akins specifically mentioned President Obama's climate change policy and the EPA's regulatory inklings. The utility has already dropped emissions dramatically and plans to reduce its coal capacity by 27% by 2016.

AEP's not alone. FirstEnergy (NYSE:FE) announced earlier this month that it plans to retire two more coal-fired power plants that currently account for a whopping 10% (2,080 MW) of its total capacity.

Dominion (NYSE:D) took its own take on the coal situation by converting three coal plants to biomass. The first facility went operational a few weeks ago, and the others will come online by 2014 to add 153 MW to the utility's generation fleet.

Unlike FirstEnergy and Dominion, AEP is doing more than putting coal out to pasture. The utility won the 2013 Edison Award for its innovative "advanced ultra-supercritical steam cycle" coal-fired power plant. The $1.7 billion, 600 MW plant sports a record 39% efficiency using low-sulfur coal, and took the utility seven years to weave its way through regulatory and construction challenges.

Other utilities are following suit, pushing hard to turn coal into "clean coal." Integrys (NYSE: TEG) currently has a $17 million rate request on the table to add coal dust collectors to an 824 MW facility, a move that would put the utility one step closer to covering environmental costs.

Savings and rates
While AEP is spending to cut its coal addiction, it's also cutting costs across the board. Akins cites $5 million to $10 million in savings at each of three plants recently scrutinized for spending. Around 15 to 20 plants will ultimately undergo the same analysis, and savings initiatives like these are being implemented across the board.

While savings should continue to ramp up, rates are making their own improvements. AEP's regulated operations currently enjoy a 10.2% ROE, which should increase as retroactive rates and expected approvals come into play.

Looking ahead
Despite tough economic times and a continually transitioning company, AEP reaffirmed its 2013 guidance of $3.05 to $3.25 per share and expects long-term earnings growth to clock in between 4% and 6%. To top things off, this dividend stock earned its title with its 413th consecutive quarterly distribution ("Steady as you go," according to Alkins).

AEP's slow start to innovate and adapt to the current energy environment made me hesitant about last quarter's positive report. But with more steady earnings and an increasingly progressive outlook, I'm ready to make an "outperform" call on my Motley Fool CAPS page.