At a venue well known for dramatic revelations, Man of Steel director Zack Snyder made what might be the biggest reveal of all at this year's San Diego Comic-Con: Time Warner (NYSE:TWX) will bring Batman and Superman together in 2015.

The untitled epic -- let's call it Man of Steel 2 for now -- takes the place of what many had thought would be a Justice League film. Instead, we'll get "Word's Finest," an onscreen version of the comic-book series in which Batman and Superman would share an adventure.

Or maybe it'll be more like "The Dark Knight Returns," a 1980s epic miniseries from writer and artist Frank Miller that helped redefine the medium. In it, older versions of DC Comics' Big Two face off in an epic battle that ends with a dying Bruce Wayne delivering this speech, which Snyder had actor Harry Lennix deliver to the audience before revealing the combined logo you see above:

Here's a closer look at the original, as drawn by Miller: 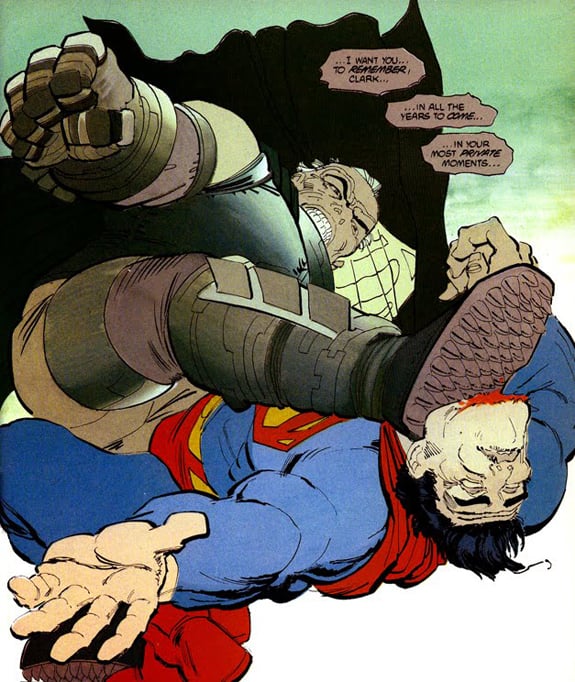 As a fan, I love the idea of two iconic characters slugging it out on the big screen. As an investor, I love the box office prospects for a "World's Finest" team-up. I'm also encouraged by the timing, because it gives necessary space for DC to build up to a Justice League film in the same way that Marvel built up to The Avengers.

In the meantime, Man of Steel 2 has a decent chance to be the most profitable DC Comics film ever. Why? Former co-financier Legendary is now partnered with Comcast's (NASDAQ:CMCS.A) Universal Pictures, which means Warner should be be able to keep 100% of the proceeds from future DC Comics films.

Comic-Con is over, but the Time Warner stock story is only just beginning.