Last week, Ford (NYSE:F) and General Motors (NYSE:GM) both posted solid Q2 earnings on the back of their strongest region, North America. The seasonally adjusted annual rate, or SAAR, has improved steadily, boosting sales across the industry and especially in full-size pickups. 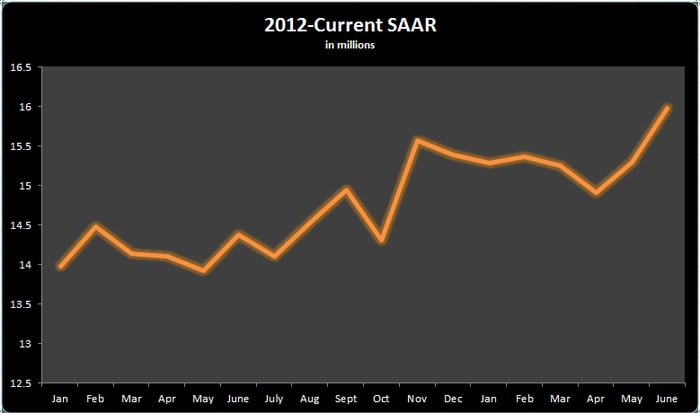 On the back of the F-Series, which saw a sales increase of 22% this year, Ford posted record pre-tax profits in North America -- pretty impressive for a company that totaled more than $30 billion in losses between 2006 and 2008. With all the good news here at home and everything else in the earnings report, it's easy to miss bright spots overseas -- namely Europe and Asia/Pacific/Africa. Here are the some of the finer details, and why it matters to Ford investors.

Europe
Gloom and doom coming from Europe, which is well deserved, has been a massive overhang on Ford's share price for the past year or two, as losses came in the billions. Headline after headline pointed that out, and it was a drain on Ford's bottom line -- but that looks to be turning around.

Even with the declining SAAR, Ford managed to improve its wholesale volume and revenue both by about 8%. Between that and an increase in market share, Ford was able to partially offset the lower industry sales for a much improved loss of $348 million in the second quarter.

Its reduction of losses was enough for Ford executives to trim down its year-end estimate from $2 billion to $1.8 billion. There's even an off chance that Ford's losses will end up better than the $1.8 billion estimate, and only $810 million has been lost for the first half of 2013. Management is still holding firm on its goal to be profitable in the region by 2015, and it seems that Ford's losses are reducing ahead of the industry curve -- great news for investors.

While fixing Europe's woes will contribute nearly $1.8 billion in bottom line profits, growth in Asia could represent even more in the years to come.

Asia/Pacific/Africa
The Asia/Pacific/Africa region was easy to miss, with focus on North America and Europe, but the One Ford plan is taking hold here, as the region reported its best-ever quarterly result in last week's conference call. It improved over last year's loss of $66 million to a pre-tax profit of $177 million. Its operating margin jumped 8.7 percentage points from a year ago as well, an impressive turnaround.

The reason for the jump was that wholesale volume increased 27%, boosting revenue in the region up 35% -- and that's not even including Ford's joint-venture revenue. In the most important part of the region, China, sales of the new Focus, Kuga, and EcoSport helped Ford increase its market share by 1.5 percentage points to 4.3%. That's well on the way to Ford's goal of 6% market share, doubling what it once was, by 2015.

With Ford's strong first-half performance and increasing market share, the company now predicts that it will be profitable for the full year. "We are beginning to see the benefits of our aggressive investment strategy in Asia/Pacific/Africa, with an expanding portfolio of global One Ford products tailored for the region with manufacturing hubs in China, India, and ASEAN," the Association of Southeast Asian Nations, said Bob Shanks, Ford CFO, in a press release.

Bottom line
The biggest takeaway you get from Ford's Q2 performance is that it wants its reliance on the North American region to be balanced out as soon as possible. Right now, North America accounts for almost all of Ford's earnings, but if things continue to progress as they are, international operations will be substantially more profitable in a couple of years -- which will boost Ford's bottom line and reduce reliance on any one economy or region for success. It also shows how much growth potential Ford still has overseas with its market share in the low single digits in many regions.

I expect success overseas to continue, and for Ford's share price to continue climbing as that success unfolds in the years ahead.